Dubai: For someone like Roger Federer who has an enduring love affair with Dubai, the beginning was not a happy one though.It was only the 10th edition of the Dubai Duty Free Men’s Open in 2002 when a young, unheralded Swiss player was pulled up and... 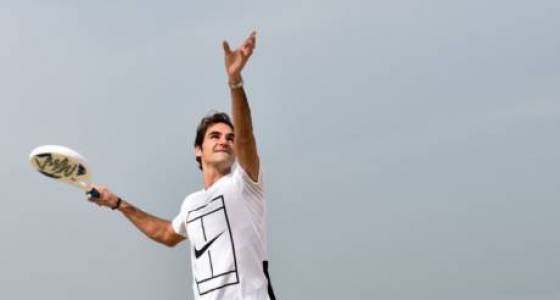 Dubai: For someone like Roger Federer who has an enduring love affair with Dubai, the beginning was not a happy one though.

It was only the 10th edition of the Dubai Duty Free Men’s Open in 2002 when a young, unheralded Swiss player was pulled up and fined for violating the ‘Best Effort’ rule by then Tournament Director Jeff Chapman for not trying hard enough against his opponent [Rainer Schuettler].

Forever the gentleman, Federer accepted the fine, but not the charges levelled against him.

During the next decade and more, there was an awesome exhibition of talent on court as the Swiss endeared himself to his steadily growing fan base in Dubai by becoming one of two players — Novak Djokovic being the other — so far to win three titles in-a-row in his total of seven.

Way back in 1998 when he was just 17, and much before his career had reached its snazzy orbit, Federer had received a similar fine under the same rule while playing in a satellite event in Kublis, Switzerland.

Losing 6-7, 2-6 against fellow Swiss Armando Brunold, Federer was slapped with a $100 fine by tournament referee Claudio Grether. Federer left the eastern Swiss town with arrears of $13 as the prize money for the competition was a mere $87. Perhaps, this was the only professional tournament that Federer figured in where he actually lost money.

For the record, the ‘Best Effort’ rule stipulates that professional players must put forth their best efforts in every competition. “I remember that fine very clearly. Just to start with, the fine was not justified at all. I was in the second round of singles and second round of doubles and I was accused of tanking. That was completely wrong. When you come and lose 6-1, 6-1 in the first round, then that is maybe tanking. But I lost in the second round while I was trying to play a good tournament in both the singles and the doubles,” Federer recollected in an interview with Gulf News.

“What happened is that it made me realise once more that what is really important is one’s attitude. The problem here is that people always accuse me of not trying hard enough due to the way I play. Then when things started going well for me, they say everything is just so simple and easy.

“But as a player I need to make sure I have enough intensity and energy to give back something to the sport. That’s why the following year when I returned I came and won this tournament and that too three years in a row just to show that: I don’t know what you’re talking about,” he smiled.

“These are all really important milestones and important moments in my career that you try to understand them and make it the right way and you learn from them and not make the same mistake twice.”

No wonder, Federer is regarded as the legend he is. His victory at the end of January for a record 18th Grand Slam crown came following his return from the longest injury break of his career. Federer’s latest Grand Slam win was perhaps his most surprising one, as he had last won a big title at Wimbledon in 2012, and at 35, his best days were considered over.

But the Swiss ace beat his old nemesis Rafael Nadal in five sets to become the second oldest major winner in the post-1968 Open Era after Ken Rosewell had claimed the 1972 Australian Open at the age of 37.

Federer and a number of other top tennis players are excelling after turning 30, when a generation ago it was unusual for players to compete at a high level past that age. There have been exceptions, of course — with Jimmy Connors playing till he was 43 — but for the most part players used to peak at a younger age and retire even younger. Studies carried out say that on the men’s side, the average age of the top-10 players in 1992 was 23.2 years and in 201 it had crept up to 28.6 years.

“I think players are keeping themselves in good shape. They are more experienced, and they are using the experience to their advantage while understanding several aspects like the training and tournament scheduling. May be you don’t recover quickly from injury, but there are many good things about being over 30,” Federer said.

“You know better where you are in your life and where exactly you want to go. Whereas at 20, everything is a journey and things are exciting and its new and young and unknown. I don’t know if I would want to be 20 or 30 as both are super exciting. But at 30, you are quite settled and it can be quite beneficial from an athletes’ point of view,” he smiled.

His fifth Australian Open triumph was considered improbable in the current era that had been ruled by Murray and Novak Djokovic before the top seeds’ early exits threw the door open for the elder statesman of the game. Federer, who spent a record 302 weeks at No. 1 and was inside the top 10 from 2002 until 2015, saw his ranking slide to 17 — his lowest since 2001 — after he spent six months out last year with his knee injury.

“For me, it is not about pushing myself at all because I don’t have to over-train any more. It’s the crazy amount of hours you’ve got to put in between 14 and 22 that you’ve just got to keep playing and rake in the hours. So for me, it’s really about being smart and simple,” Federer observed.

“The pushing at this age comes by itself and that’s where I can really thank my fans, who have always been there for me. They’ve been incredibly supportive and I’ve been lucky enough to always be playing on centre courts, playing against the best players and honestly, I am enjoying everything. It’s a good life for me,” he added.

So far, the Swiss has earned more than $100 million in prize money alone. Leave alone talk about retirement plans, Federer does not see himself slowing down even a bit. “For the moment I would like to set up my life in a good way, regardless if I retire or not, I am going to be fine. I have set myself up like this since a few years now and that’s why I am peaceful and so happy. I have a great wife and a great family and some good friends as well — which is going to be important to me when I retire,” he said.

“And goals in general have always been winning tournaments. Rankings is a bit secondary, especially when you’ve been No. 1, like myself, or like Novak [Djokovic] or Rafa [Nadal], the rankings don’t play that big a role than leave the tournament as a winner. For this year, Wimbledon or the French Open or the US Open is going to be important to me, along with Basel and then obviously the World Tour Finals. Those are my goals,” Federer signed off.