Kyle Lowry’s recuperative powers aren’t quite as strong as he thinks they are, and the Toronto Raptors may suffer because of his over-estimation.The team’s all-star point guard is out indefinitely, with a sore right wrist he thought would... 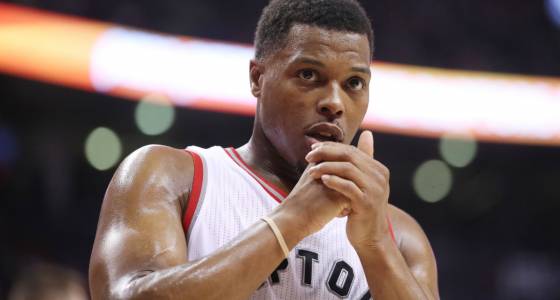 Kyle Lowry’s recuperative powers aren’t quite as strong as he thinks they are, and the Toronto Raptors may suffer because of his over-estimation.

The team’s all-star point guard is out indefinitely, with a sore right wrist he thought would get better after he took part in the NBA’s three-point shooting contest and all-star game last weekend in New Orleans.

Lowry, enjoying the best season of his 11-year career, originally hurt his wrist in a win over Charlotte on Feb. 15, but took part in the all-star competitions figuring he would just play through the discomfort.

He was icing his wrist on the bench during Sunday’s game in New Orleans but told reporters after the game he wasn’t in any serious pain and that he would be fine.

That turned out to be not quite true.

“He thought it was going to get better. He did it in the Charlotte game, had treatment over the all-star break down in New Orleans,” coach Dwane Casey said before the Raptors faced the Boston Celtics at the Air Canada Centre on Friday. “(He) got treatment, came back last night, got treatment and woke up this morning and it wasn’t any better.

What it is, is a huge blow to a Raptors team that was brimming with confidence heading in the final 25 games of the regular season, bolstered by the addition of forwards Serge Ibaka and P.J. Tucker.

While Toronto does have a lot of point guard depth — Cory Joseph started against Boston, Delon Wright was his backup and Fred VanVleet is waiting in the wings — Lowry’s leadership cannot be replaced.

Lowry is one of the toughest players on the team and never shies away from taking the big shot or trying to make the big play. In 45 games so far this season, he is averaging a career-best 22.8 points while dishing out 6.9 assists per game and grabbing 4.7 rebounds.

More important, his tenacious style and ability to take over games in the fourth quarter makes him the team’s most indispensible player in many regards.

Team officials couldn’t say how long Lowry would be out, and the Raptors are facing one of the busiest stretches of the season with games Sunday, Monday, Wednesday, Friday and Saturday before a three-day break.

The injury also robs Toronto of a chance to have its full team intact for one of the few times this season. With Patrick Patterson back after a six-game absence due to a knee bruise and Ibaka and Tucker on board, Casey was looking forward to developing a consistent playing rotation with all his best players available.

“Every game from here on out, no matter who we play, is an important game,” the coach said. “Unfortunately we’ve got to go against the hot team in front of us, but we’ve got to face it. I’m encouraged by two good days of practice. We got a lot done with Serge, incorporating him into what we’re doing.”