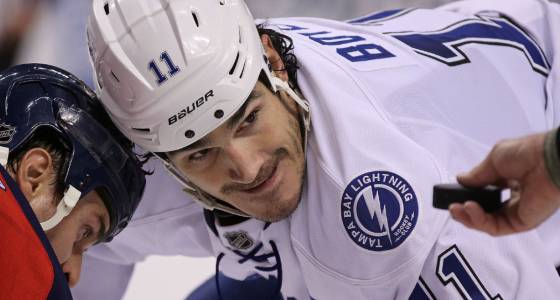 Having put Joffrey Lupul, Stephane Robidas and Nathan Horton on long-term injured reserve at the beginning of the season, the Maple Leafs have more than $13 million in cap space to work with in the midst of a playoff race.

“We will just have to wait and see if there are any opportunities,” the typically tight-lipped GM said Sunday. “You make a call, you get a call. It’s nothing new. It’s that time of the year.”

While his team took off Sunday for a three-game trip to California, starting Tuesday in San Jose, Lamoriello remained in Toronto to deal with possible trades.

Lamoriello can add a player to help the Leafs now, at the price of a prospect, or he can take on an unwanted contract and add a prospect or pick in the exchange — like they did in acquiring Connor Carrick from the Washington Capitals last season along with Brooks Laich, now earning $4.5 million with the Toronto Marlies.

Given the cap space, they could do both.

“You put a blanket over everything,” said Lamoriello. “You’re going to do what’s best. The plan has not changed. We’re still doing whatever it is to put this franchise in a position to sustain itself for a period of time.

“What we’re doing right now, we’re going through a lot of young players gaining a tremendous amount of experience and doing things the right way. Sometimes you make mistakes along the way. We’re giving them the opportunity to grow. Whatever you can do to support that, you do. We’re going to stay on course.”

Coach Mike Babcock talked Saturday about a lack of depth at centre. The team has also been in the market for a right-handed defenceman.

They’ve been linked to two players who could solve those problems: centre Brian Boyle of the Tampa Bay Lightning and defenceman Kevin Shattenkirk of the St. Louis Blues. Both are set to become unrestricted free agents on July 1.

Boyle, 32, earns $2 million and has 100 playoff games to his credit. The Lightning, seven points behind the Leafs in the East, appear to be throwing in the towel — starting with dealing goalie Ben Bishop to the Kings on Sunday night.

The Blues, however, are very much in the playoff mix, but fear they’ll lose the 28-year-old Shattenkirk — who earns $4.25 million — for nothing in the summer. They rolled the dice last year on David Backes and Troy Brouwer, only to see both walk as free agents and would be loath for that to happen to the franchise again.Shattenkirk, though, reportedly rejected a contract extension offered by a team that tried to acquire him recently.

Boyle would help the Leafs now, while Shattenkirk could give the defence a big lift immediately and maybe in the future.

“At this point, there is nothing that has transpired,” said Lamoriello. “It just becomes more magnified now because you only have a few days where you can do something. Whatever you can do to get better, you always do.”

As things stand, Lamoriello says he’s quite happy with how the season has gone, with the rebuild of the franchise seemingly a year or so ahead of schedule.

“If in September, when we started training camp, somebody said we would find ourselves where we are today, with the number of young players we have and the number of changes that transpired, we’d sign on that dotted line,” he said. “You have to be pleased with not only the development, but the success up to this point we have had.”