CaptionCloseLAREDO — With a UIL state tournament berth on the line and her team trailing by two, Judson coach Triva Corrales went to what has always worked best.Following a timeout with 1:56 remaining in the fourth quarter, she got the ball to the low... 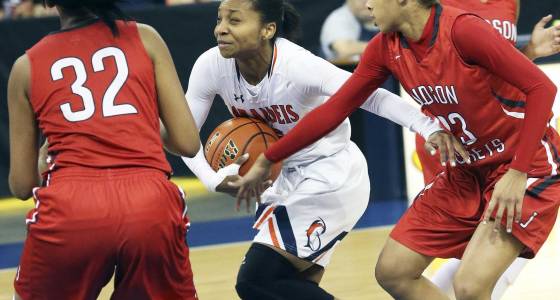 LAREDO — With a UIL state tournament berth on the line and her team trailing by two, Judson coach Triva Corrales went to what has always worked best.

Following a timeout with 1:56 remaining in the fourth quarter, she got the ball to the low post to junior Desiree Lewis.

Lewis took command from there. She scored and was fouled. She made the free throw and that sent the Rockets to a 63-56 victory over Brandeis in the Region IV-6A championship held Saturday at Laredo Energy Arena.

“Our bread and butter is down low, and we wanted to take advantage of that,” Corrales said.

“We saw their tongues hanging down, and we wanted to pound it down low, and that’s what we did to get the win,” Judson sophomore Kyra White said.

Following the three-point play, Lewis scored on another basket in the low post and was fouled twice on two other attempts. She made 3 of 4 free throws to put it away.

“Desiree stepped up and made some real good moves,” Brandeis coach Jennifer Brewer said. “(Judson) went for every loose ball, and they left it on the floor. That’s what it takes. It’s the little things. They dominated on the little things.”

Lewis scored 25 points. She was able to stay out of foul trouble, which had been a problem the last two games.

“I fortunately had a good game today, and they just gave it to me,” Lewis said.

JThe Rockets will play in a Class 6A state semifinal on Friday in the Alamodome. The opponent and time will be determined Sunday.

The final score was the largest lead either team held.

The Broncos battled back and took a 52-50 lead after Georgia-bound guard Gabby Connally’s drive at the 3:14 mark of the fourth quarter. Lewis tied it up at 52. Denay Griffin put Brandeis on top 54-52 with a layup with 2:08 left.

That set up Lewis’ big finish. She had 12 points in the fourth quarter.

“Desiree scored it every time, and we kept feeding it to her,” Judson senior Chantel Govan said.

Corrales is in her seventh season as a head coach, all at Judson.

“For me, this is a dream come true,” she said. “This has been the ultimate goal, and it’s been amazing.”

Brandeis’ run ends after qualifying for the regional tournament for the first time in school history.

“It was so fun watching the kids work hard every day,” Brewer said. “It was a great season. I was proud of my kids all year long. We came a lot further than a lot of people thought we were going to. It was a good ride. It really was.”