Peering into the Knicks’ power structure, Larry Brown has a message for Phil Jackson: If you want the triangle offense, be the coach.The former Knicks head coach said it’s wrong for Jackson to force his style of play on current coach Jeff Hornacek,... 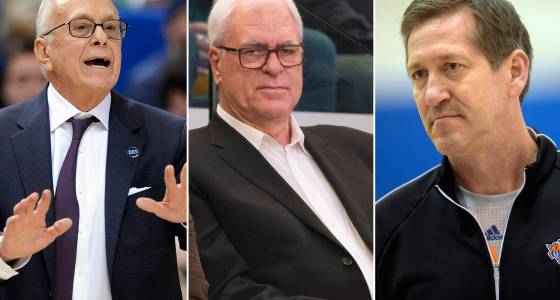 Peering into the Knicks’ power structure, Larry Brown has a message for Phil Jackson: If you want the triangle offense, be the coach.

The former Knicks head coach said it’s wrong for Jackson to force his style of play on current coach Jeff Hornacek, as the Knicks place a bigger focus on the system Jackson made famous.

Brown, in an interview on Sirius XM Tuesday, said the players, coaches, GM and president all have to be on the same page in order to win, which he doesn’t see happening with the Knicks.

“I can’t figure out how you can hire a coach and tell him how you want him to play,” said Brown, who coached the disastrous 2005-06 Knicks. “… I can’t figure out how you draft players for a coach that you know coaches a certain style. … You’re talking about one of the greatest coaches in the history of our sport. Let him coach. If he wants to do the triangle, put it in and let him coach it and find players that are comfortable playing in it.”

Knicks turning rest of season into triangle auditions 0:0 The Knicks are coming full circle. Or is full triangle... The Knicks have reemphasized the triangle offense in the past few weeks, with Hornacek saying Tuesday that the rest of the season will feature weeding out those who can’t play within the system.

As Hornacek implements the president’s much-maligned offense, Jackson himself believes he is physically unable to coach the philosophy. Jackson has a bad back and surgically repaired knees, rarely making road trips to sit in the stands, never mind coach on the sidelines. But if he wants to pull the strings, Brown says, he should be doing it himself.

“I can run it with Kobe [Bryant] and Shaq [O’Neal]. I can run the triangle with Michael Jordan and Scottie [Pippen],” Brown said. “Because it spaces the floor and does a lot of things. But the triangle takes time to run. If you see the NBA now, a lot of it is in transition. Most people now try to get an easy shot off in six or eight seconds before the defense gets set. And if they can’t the break, then there’s more time to utilize. I just think with his knowledge, let him coach it. Nobody does it better. You have to have pieces in there that can play it.”