OKLAHOMA CITY >> As most players anxiously thumbed through their phone using the plane’s Wi-Fi connection, the Lakers alerted them they made a trade to the Houston Rockets. “Everyone was looking at me,” Lakers guard Nick Young said.... 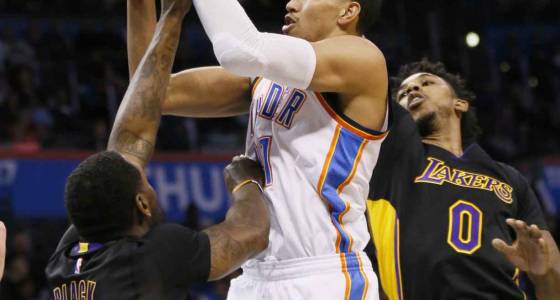 OKLAHOMA CITY >> As most players anxiously thumbed through their phone using the plane’s Wi-Fi connection, the Lakers alerted them they made a trade to the Houston Rockets.

“Everyone was looking at me,” Lakers guard Nick Young said. “I thought I was gone.”

“That was tough. That’s one of my best friends off the court,” Lakers guard D’Angelo Russell said. “On the court, I learned so much from him. This is a business. Whatever happens, there’s some things we can’t control. But that’s my brother.”

Although Lakers coach Luke Walton thought Young “was great” on handling his uncertain future, Young still called the experience “tough.” But just as he felt relief over still wearing a Lakers uniform, he encountered a different obstacle in the Lakers’ 110-93 loss to the Oklahoma City Thunder on Friday at Chesapeake Energy Arena.

Young had three points on 1-of-9 shooting in 20 minutes, something that he attributed to “just getting the rust off” and Walton chalking it up to just “an off shooting night.” Still, Walton hardly viewed Young’s play or his increased focus on the young players as any reason to change Young’s role as the starting shooting guard. Instead, Walton suggested Young will play more than his season-average of 26.5 minutes considering the Lakers traded high-volume shooter Lou Williams this week to Houston.

“His role will be similar for now,” Walton said.

“I understand the business side and letting the young guys grow,” Young said. “I still consider myself one of these guys. I can make shots for them when they need me.”

Even with the trade deadline passing and practice ending, Magic Johnson found another way to ingratiate himself with the Lakers by having dinner with the team’s coaching staff in Oklahoma City on Thursday night.

“Just talking about the ideas, visions and what he sees and what I see,” Walton said. “It’s been a lot of healthy dialogue going on.”

On Tuesday, Lakers president Jeanie Buss named Johnson the president of basketball operations, demoted Jim Buss and fired Mitch Kupchak after serving as general manager for the past 17 years. Since then, Johnson became heavily involved with both handling trades before the deadline and helping out players with individual instruction during Thursday’s practice. Johnson also told players he is open toward having any individual sessions.

Walton observed “letting the other coaches get to know him and feel comfortable with him was important to him.” That’s because Johnson has expressed hope to have synergy throughout the organization. In addition toward Johnson traveling with the Lakers to Oklahoma City, scout Jesse Buss and D-Fenders president Joey Buss also went on the trip. Although Johnson was not present at the team’s morning shootaround on Friday, Johnson attended the game and later talked on the Spectrum SportsNet telecast.

“There’s a reason he’s as successful as he is,” Walton said. “He has a way with people and he’s been in the office all day every day since the change has happened. He’s constantly trying to get things done. He knows what he wants. It’s been interesting and fun watching him work.”

Will Johnson continue to work this way as a constant practice observer and talent companion? Though Walton said “we’ll love to have him around as much as possible,” Johnson’s recent involvement partly stemmed from planting roots with his new job.

“Once we get back in the flow of things,” Walton said, “I wouldn’t expect him to be on all these one-game road trips across the country.”