Lakers put up little resistance in loss to Spurs

On a fast break during the fourth quarter, Jordan Clarkson lobbed the ball up for Corey Brewer, his teammate for the last four days. Only Brewer wasn’t expecting it, the pass didn’t connect and those around them couldn’t help but laugh.The San Antonio... 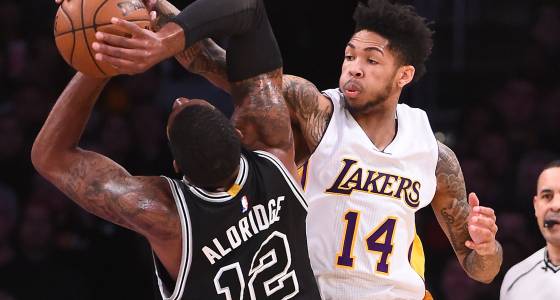 On a fast break during the fourth quarter, Jordan Clarkson lobbed the ball up for Corey Brewer, his teammate for the last four days. Only Brewer wasn’t expecting it, the pass didn’t connect and those around them couldn’t help but laugh.

The San Antonio Spurs marched on, with little regard for a Lakers team that’s still adjusting in more ways than one. The Spurs beat the Lakers 119-98, handing Los Angeles its 41st loss of the season. San Antonio improved to 45-13, and 3-0 against the Lakers.

Spurs star Kawhi Leonard made six of his first seven shots. After he made two free throws late in the first quarter, he had as many points as the Lakers — 16.

From there, the Spurs coasted.

Lakers rookie Brandon Ingram played a game-high 35 minutes. He made 10 of 15 shots for 22 points. His field goals made and points were both career highs.