LOS ANGELES – With each made shot and well-placed pass, Lakers point guard D’Angelo Russell provided the kind of leadership Coach Luke Walton has asked of him all season.With each hustle play on both offense and defense, Lakers forward Julius... 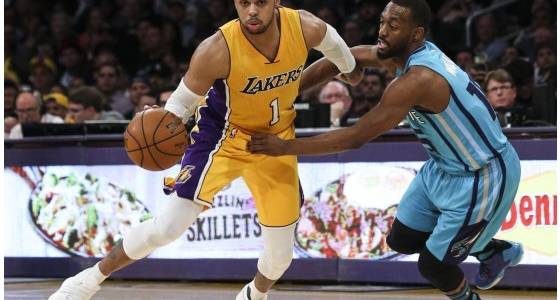 LOS ANGELES – With each made shot and well-placed pass, Lakers point guard D’Angelo Russell provided the kind of leadership Coach Luke Walton has asked of him all season.

With each hustle play on both offense and defense, Lakers forward Julius Randle displayed the kind of work ethic Walton believes is required for consistent performances.

On the same night the Lakers saw promising growth from their young roster, they still fell victim to their limitations in crunch time in a 109-104 loss to the Charlotte Hornets on Tuesday at Staples Center. The game captured perfectly why Walton has shifted his focus more toward development than bottom-line results.

The Lakers (19-42) hardly seemed thrilled with dropping their fifth consecutive game (and 16th of their last 20). They also clinched four consecutive losing seasons for the first time since 1961, the franchise’s first year on the West Coast.

“We’re not happy because we didn’t win,” Walton said. “Losing’s not fun and not supposed to be fun.”

Still, the Lakers stood tall and proud regarding the experience itself.

The Lakers battled throughout a game that featured eight ties and 15 lead changes, before Charlotte guard Kemba Walker made a go-ahead 3-pointer for a 100-98 lead with 1:55 left. After Russell missed a layup, Charlotte forward Marvin Williams converted another 3-pointer for a 103-98 lead. After Lakers guard Jordan Clarkson missed a dunk in the final minute, Charlotte started milking time off the clock. Though Russell made consecutive 3-pointers to cut the deficit to 107-104 with 13.3 seconds left, the Hornets converted free throws to prevail.

“I look at it as a great opportunity. The only way you learn is to get an opportunity and experience it and most likely fail,” Walton said. “When you fail, it’s fine because you can get back in the gym and work on it. It's fun to watch these guys get to the next level.”

Relatively speaking, the Lakers jumped to the next level against Charlotte (26-34). Walton had stressed during Tuesday’s morning shootaround about playing with better effort than they showed in their 21-point loss to San Antonio on Sunday. Walton also brought up the Lakers coughing up a 19-point halftime lead against the Hornets in late December. On Tuesday, the Lakers were well on their way to playing a complete game.

A day after Magic Johnson reiterated his hope that Russell can improve as a leader, the second-year guard played a balanced game in points (23), efficient shooting (8 for 17) and playmaking (nine assists).

“My teammates were in the right spot when they made shots,” Russell said. “I wasn’t thinking about that out there. I just played hard and tried to compete.”

Because of that, Walton thought Russell showed more leadership qualities than any dramatic speech during a timeout or huddle could have accomplished.

“Being a leader is about making your teammates better and it’s about setting a tone with your play,” Walton said. “That’s why there’s a ton of quiet leaders in this league who don’t always talk. But with how hard they play, they lead.”

Two days after going 2 for 9 from the field against the Spurs, Randle posted his 13th double-double of the season (23 points, 18 rebounds, six assists) while also occasionally playing the center spot in a smaller lineup. It seemed fitting considering Walton told him beforehand “to be aggressive in looking to score.”

“That was the longest period of time he played hard like that all season long,” Walton said. “That’s exciting to see. When he can play like that while still being under control, that’s when he is at his best. That was a lot of fun to watch him play like that.”

Moments later, Russell added that he hopes Randle watches video of the game to see for himself.

“This is a game he should be constantly watching so he can build off it,” Russell said. “It’s all mental for him.”

Energized play from the Lakers’ 2014 and 2015 lottery picks led to strong play from others.

After coughing up a 19-point lead to the Hornets on Dec. 20, the Lakers mostly maintained their strong play. Sure, they allowed Charlotte to go on a 13-2 run to open the second quarter, but that became a moot point in the second half.

While Russell and Randle provided game-long consistency, Nick Young and Tarik Black overcame poor starts. After missing four of his first six shots, all from 3-point range, Lakers guard Nick Young had 15 points on 5-of-11 shooting. After going scoreless in the first half and collecting two fouls, Black finished with 11 points and five rebounds while going 5 for 7 from the field. Clarkson, who put the Lakers ahead on a driving basket with 2:23 to play, added 16 points on 7-of-14 shooting.

Walker scored 11 of his game-high 30 points in the fourth quarter, and added five rebounds and seven assists. Frank Kaminsky added 24 points and 12 rebounds for the Hornets, who won for just the third time in 16 games.

“We shouldn’t be celebrating or nothing, but it’s good to see the guys play like that,” Clarkson said. “The energy we played with, we have to bring that every night.”