By most wrestling standards, Mikey Labriola and Bethlehem Catholic enjoyed outstanding success at the District 11 3A wrestling tournament this weekend at Liberty’s Memorial Gym. Labriola, a senior, became a four-time D-11 champ when he topped Northampton... 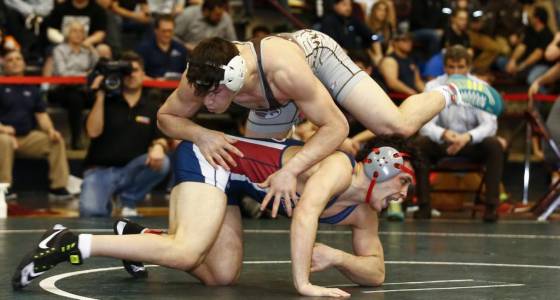 By most wrestling standards, Mikey Labriola and Bethlehem Catholic enjoyed outstanding success at the District 11 3A wrestling tournament this weekend at Liberty’s Memorial Gym.

Labriola, a senior, became a four-time D-11 champ when he topped Northampton senior Cade Moisey 15-8 in the 170-pound final. Labriola’s classmate Niko Camacho, looking like a unstoppable force against very movable objects, picked up the most pins/fastest time (4 in 9 minutes, 32 seconds) en route to the 285-pound championship.

Becahi had two runners-up in seniors Jarred Papcsy (132) and Ryan Zeiner (152) and advanced 10 wrestlers to next week’s PIAA Northeast Regional at Liberty – more than any other D-11 team.

The Golden Hawks won the team title with 240 points to Nazareth’s 223 to help claim a small amount of revenge for losing to the Blue Eagles in that epic PIAA 3A team final.

“Winning the team title makes up a little bit for losing to Nazareth at the state team duals,” Labriola said. “If we couldn’t beat them in duals, winning the district individual championship is pretty good.”

Yet nobody wearing Becahi brown and gold seemed terribly enthused about it all.

A reporter said to head coach Jeff Karam that he's see Karam in Hershey for the PIAA tournament and got this response: "If we get there."

Labriola was about as gloomy.

“Being a four-time District 11 champion is pretty cool, but it definitely didn’t come in the way I wanted it to,” said the defending state champion and Nebraska signee, ranked No. 2 nationally by Intermat. “I wish it happened differently. I got taken down.”

That he did. After Labriola took Moisey down to start the bout and then let the Konkrete Kid up, Moisey gained control to take a 3-2 lead as the packed house buzzed, smelling what would have been the upset of the year, if not many years.

Labriola eventually took control of the bout but never regained the sense of confidence and hop in his step he has at his best. It was just the second time he was taken down all season.

“I don’t feel too good right now,” he said. “Cade is an excellent wrestler but I don’t think I should have let him take me down.  I just have to work harder. Next week will be different – no more takedowns.”

Becahi won the team title despite some startling losses by some its more experienced wrestlers. The Golden Hawks did well enough in the consolations (three third-places, two fourths, one fifth) to pile up enough points to make up for a performance that nobody was smiling about.

“It was good to see some of our younger guys regroup and help us win the team title,” Labriola said. “That’s what we were looking for from them.”

So the D-11 tournament wasn’t a total loss even by Becahi’s high standards.