Galleries Videos CONTACT ADVERTISE
Famagusta 29°
few clouds
BUSINESS EDUCATION ENTERTAINMENT HEALTH POLITICS SCIENCE SPORTS TECHNOLOGY
12:08 Guide To Online Sports Betting: How To Choose A Sportsbook
08:28 What Are Some Reasons to Consult a Brain Injury Lawyer?
09:24 Blockchain Solutions for Enterprises: How To Increase Efficiency And Profitability
07:06 How To Deal With A Car Crash In New York
17:43 Tips to keep in mind while choosing the casino site
11:34 Relation Between Employee Theft and Pre-employment Screening Check
04:37 Search your own desired site to play sports for betting
18:00 Top 3 Career Path Options for Business Analysts Preview
15:35 The history of Imen Jane, who is the influencer and the charges on the...
18:48 Sebastian Vettel's Greatest Races
BIST
1125
GOLD
455.544
USD
7.6071
GPB
9.7388
EUR
8.8525
Breaking News
Top 3 Career Path Options for Business Analysts Preview
Close

The winners from the past two L.A. Marathons will be competing in the March 19 Skechers Performance Dodger Stadium-to-Sea race, event organizer Conqur Endurance Group has announced.Reigning champion Weldon Kirui and 2015 winner Daniel Limo, both Kenyans,... 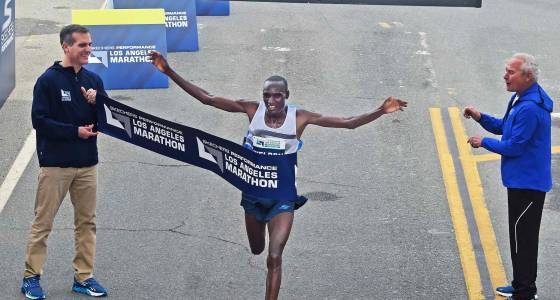 The winners from the past two L.A. Marathons will be competing in the March 19 Skechers Performance Dodger Stadium-to-Sea race, event organizer Conqur Endurance Group has announced.

Reigning champion Weldon Kirui and 2015 winner Daniel Limo, both Kenyans, have said they will compete in the 32nd annual 26.2-mile race.

Olympian Metawet Tufa of Ethiopia leads the women’s field. Angela Orjuela of Columbia, who competed in the 2016 Games and Kenyans Sarah Kiptoo, Jane Kibii and Hellen Jepkurgat are also entered.

Kirui won the race in 2 hours, 13 minutes, 7 seconds last year, the slowest time in the seven years the race has been run on the current course. Limo was third.

“In 2012, I came in second place in Los Angeles and bought two cows with my prize money, one for my family and one for my parents,” Kirui said. “When I won last year, I built them a house. The people of Los Angeles have been nice and cheerful to me and now I want to be a two-time champion.”

The top American returnee is Jose Madera of Anaheim, who finished seventh.

Nataliya Lehonkova of Ukraine went wire-to-wire to win the women’s race in 2:30:42 last year. She is not scheduled to race this year.