One day after No. 1 goaltender Jonathan Quick returned to the net from a 59-game absence because of a groin injury, the Kings acquired goalie Ben Bishop from the Tampa Bay Lightning in exchange for goalie Peter Budaj, a prospect and draft picks on Sunday.The... 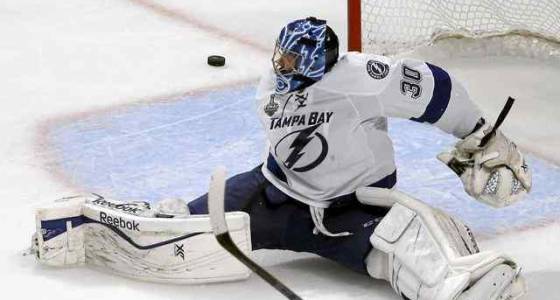 One day after No. 1 goaltender Jonathan Quick returned to the net from a 59-game absence because of a groin injury, the Kings acquired goalie Ben Bishop from the Tampa Bay Lightning in exchange for goalie Peter Budaj, a prospect and draft picks on Sunday.

Bishop, 30, is 16-12-3 with a 2.55 goals-against average and a .911 save percentage. He lost his starting job to Andrei Vasilevskiy in the playoffs last spring and there were rumors the Lightning would trade him before he becomes an unrestricted free agent at season’s end.

Budaj was 27-20-3 with a 2.12 goals-against average and a .917 save percentage plus a career-high seven shutouts in 53 games in place of Quick, who was hurt in the first period of the season-opening game Oct. 12 at San Jose.

Quick made 32 saves during a 4-1 victory Saturday over the Ducks at Staples Center in his return to the lineup. Budaj was expected to split time with Quick over the course of the final 21 games of the regular season.

Sutter was at his condescending best when a reporter asked Saturday if it would be smart to tell center Jeff Carter to avoid future fights. Carter was a one-punch victim in a fight with the Ducks’ Ryan Kesler, only his third bout in the NHL, according to hockeyfights.com.

Most coaches in the NHL don’t want their leading goal-scorers to fight for fear of injury. But apparently not Sutter, who issued a rather emotional but nonsensical response when asked about the wisdom of a 30-goal scorer with limited fighting experience dropping the gloves.

“That’s a really dumb question,” Sutter said, growing angry. “It’s a really physical game and when you’re talking about guys that play each other lots, whether it’s (the Ducks’ Ryan) Getzlaf and (the Kings’ Anze) Kopitar or Kesler and Carter, that’s way better. …

“Somebody like Helene (Elliott of the Los Angeles Times) recognizes that Jonathan Quick is an emotional leader. People understand the game, who understand that Jeff Carter’s an emotional leader, too. We’re not playing, what do you guys play? Badminton? If I thought it was badminton, I’d tell Jeff not to fight Kesler, but in hockey we’d say it might happen once in a while.”

Kesler’s last Staples Center fight was a Jan. 13, 2014 beatdown of Dustin Brown while with the Vancouver Canucks. Kesler has 25 fighting majors during his career with the Canucks and Ducks, according to hockeyfights.com.