CARSON >> The Galaxy’s 2017 season opener is coming, whether the team is ready or not, and after a 2-1 loss to Portland on Saturday at StubHub Center, things are leaning toward the not option. L.A., which wrapped up its preseason schedule Saturday... 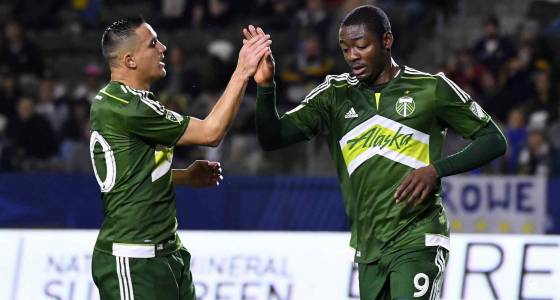 CARSON >> The Galaxy’s 2017 season opener is coming, whether the team is ready or not, and after a 2-1 loss to Portland on Saturday at StubHub Center, things are leaning toward the not option.

L.A., which wrapped up its preseason schedule Saturday before its MLS opener against FC Dallas on Saturday, scored a late goal to avoid the shutout, but showed holes in an injury-riddled defense.

“Technically, I think we’re a great team,” midfielder Sebastian Lletget said. “I think passing the ball and dominating games, we have a lot of potential in doing that. I think we just gotta get the competitive edge better. I think being in the league, I think that’s really going to bring it out of us.”

Defender Dave Romney made his first preseason start this year in the place of Ashley Cole, who is out for at least a month with a calf injury. Starting right back Robbie Rogers is still hampered by a lingering ankle injury that required surgery last year and the Galaxy traded longtime defensive stalwart A.J. DeLaGarza to Houston during the offseason.

The Galaxy’s diminished defense showed in the middle of the first half. L.A. avoided disaster from one mistake by defender Daniel Steres but his second proved costly. After a bad Steres giveaway in his own half, Diego Valeri had a breakaway attempt at goal, but chipped his attempt wide. Two minutes later, Steres got caught on the wrong side of Portland striker Fanendo Adi, who slipped behind the Galaxy defense and fired a shot into the upper corner past goalkeepr Brian Rowe.

Romain Alessandrini made his official Galaxy debut after the French midfielder arrived on Monday. The club’s newest designated player got on the field for the Galaxy’s scrimmage against Real Salt Lake on Tuesday before coming on as a halftime sub Saturday.

The 27-year-old got a rough introduction to MLS as he was stripped in the 57th minute outside of the Galaxy’s box, which set off a quick counter attack that resulted in Portland’s second goal.

Valeri took the ball, turned Rafael Garcia around and threaded a ball to Adi, who had an easy finish in front of goal for the 2-0 lead.

Alessandrini quickly bounced back, however. He showed his technical ability, taking a Jermaine Jones pass, juggling it to himself and firing off a 30-yard shot that forced a save from Portland goalkeeper Jake Gleeson. He also looped a free kick into the box that was headed by Romney and redirected into the net by Steres in the 81st minute.

“The signs were very good today,” coach Curt Onalfo said of Alessandrini. “He came in and really made an impact and was dangerous literally every time he had the ball.”

The Timbers outshot the Galaxy 18-7. Alessandrini’s substitution coincided with the Galaxy’s improved offensive play in the second half. Lletget said the team started out “sluggish,” but bounced back. With so many new additions and injuries, the Galaxy got almost no offensive production out wide, but now is the time to turn things up as the defending Supporters’ Shield winners come to StubHub Center.

“We keep everything for Dallas,” midfielder Jermaine Jones said with a smile.