DAYTONA BEACH, FLA.—Kurt Busch had a monster start to the season with a last-lap pass to win the crash-filled Daytona 500.The season opener was not NASCAR’s finest moment, though, as multiple collisions pared down the field and had a mismatched... 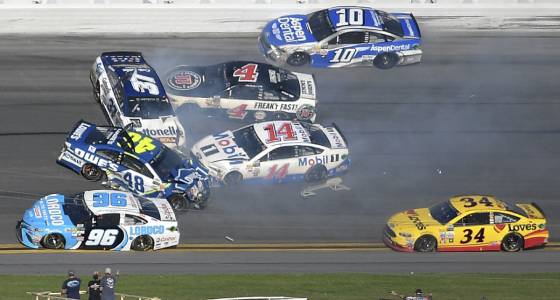 DAYTONA BEACH, FLA.—Kurt Busch had a monster start to the season with a last-lap pass to win the crash-filled Daytona 500.

The season opener was not NASCAR’s finest moment, though, as multiple collisions pared down the field and had a mismatched group of drivers racing for the win at the end.

Canadian Kennington breaks through at Daytona

It appeared to be pole-sitter Chase Elliott’s race to lose, then he ran out of gas. So did Kyle Larson, Martin Truex Jr. and Paul Menard. As they all slipped off the pace, Busch sailed through for his first career Daytona 500 victory.

It also was the first Daytona 500 win for Stewart-Haas Racing, which is co-owned by Tony Stewart. The three-time series champion retired at the end of last season and watched his four cars race from the pits.

“I ran this damn race (17) years and couldn’t win it, so finally won it as an owner,” Stewart said.

Ryan Blaney finished second in a Ford. A.J. Allmendinger was third in a Chevrolet and Aric Almirola was fourth for Richard Petty Motorsports.

But the race was slowed by wreck after wreck after wreck, including a 17-car crash at the start of the final stage that ended the race for seven-time and reigning series champion Jimmie Johnson and Danica Patrick, as well as D.J. Kennington — the first Canadian to qualify in 29 years. It was a particularly rough incident for Patrick and her Stewart-Haas Racing team, which had all four of its cars collected in the accident.

“Just seems like that could have been avoided and was uncalled for,” Johnson said of the aggressive racing behind him.

Patrick wasn’t sure how bad her car was damaged, but knew it couldn’t be fixed in the five minutes NASCAR now allots under a new rule this season. Also eliminated in the wreck was new SHR teammate Clint Bowyer.

“The five-minute clock is an interesting new element,” she said. “I don’t know if it is good or bad, but we don’t want to go on track with stuff that isn’t safe. It is a real shame. I feel like we could have been a contender at the end, for sure we could have been an influencer.”

“Do not look for NASCAR. . . when you block somebody out there. It causes almost all the big incidents. Do not look for NASCAR . . . you better hope there’s a Good Samaritan behind you who is going to accept that block, because they have that lane and the right to it. And I don’t often make those statements.”