DAYTONA BEACH, Fla. >> Decked in Monster gear, chugging a tall boy of the energy drink as he was flanked by scantily clad models, Kurt Busch celebrated the biggest race win of his career.It was Monster Madness!Busch used a last-lap pass to win the crash-filled... 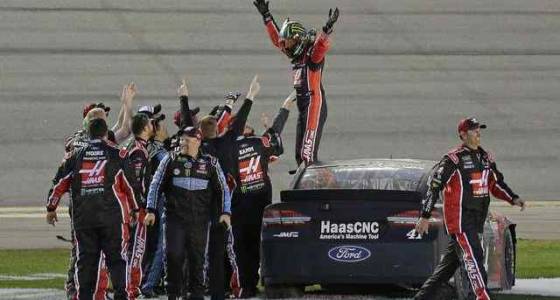 DAYTONA BEACH, Fla. >> Decked in Monster gear, chugging a tall boy of the energy drink as he was flanked by scantily clad models, Kurt Busch celebrated the biggest race win of his career.

It was Monster Madness!

Busch used a last-lap pass to win the crash-filled Daytona 500 on Sunday in the opening race of Monster Energy’s new role as title sponsor of NASCAR’s top series. Busch, it just so happens, is also sponsored by Monster and the company has strongly stood by him through his rocky career.

So this was a victory of redemption for Busch, who was suspended by NASCAR two days before the 2015 Daytona 500 for his off-track behavior, and for Monster, which has promised to pump new life into NASCAR’s sagging sport.

It wasn’t NASCAR’s finest moment, though, as multiple accidents pared down the field and had a mismatched group of drivers racing for the win at the end.

It appeared to be pole-sitter Chase Elliott’s race to lose, then he ran out of gas. So did Kyle Larson, Martin Truex Jr. and Paul Menard. As they all slipped off the pace, Busch sailed through for his first career Daytona 500 victory.

“I ran this damn race (17) years and couldn’t win it, so finally won it as an owner,” Stewart said. “It’s probably the most patient race I’ve ever watched Kurt Busch run. He definitely deserved that one for sure.”

It was a crushing defeat for Elliott, who is developing a reputation as a driver unable to immedicably digest defeat. He left the track without comment in a car driven by his father, Hall of Famer Bill Elliott.

Blaney, who is friends with Elliott, and Allmendinger, who also struggles with losing, could understand Elliott’s poor post-race mood.

“What a great win to start off a partnership,” said Raj Nair, Ford’s chief technical officer. “We were so fast. We knew we had a good chance and Kurt hung in there after getting caught up in that crash. He didn’t give up.”

“Just seems like that could have been avoided and was uncalled for,” Johnson said of the aggressive racing behind him that triggered the accident.

Patrick wasn’t sure how bad her car was damaged, but knew it couldn’t be fixed in the five minutes NASCAR now allots under a new rule this season. Also eliminated in the wreck was new SHR teammate Clint Bowyer.

“The five-minute clock is an interesting new element,” she said. “I don’t know if it is good or bad, but we don’t want to go on track with stuff that isn’t safe. It is a real shame. I feel like we could have been a contender at the end, for sure we could have been an influencer.”