Liverpool: Ronald Koeman insists he hasn’t given up on a late Europa League challenge after Everton’s 2-0 win against lowly Sunderland.A brilliantly worked finish from Idrissa Gueye in the first half opened the scoring for Everton before Romelu... 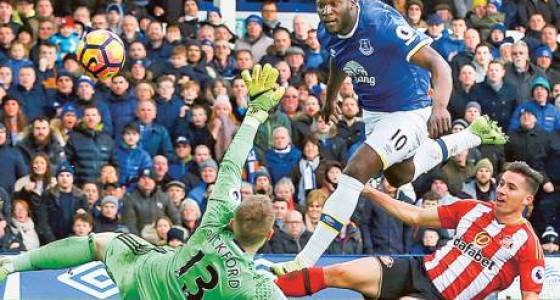 Liverpool: Ronald Koeman insists he hasn’t given up on a late Europa League challenge after Everton’s 2-0 win against lowly Sunderland.

A brilliantly worked finish from Idrissa Gueye in the first half opened the scoring for Everton before Romelu Lukaku’s late finish confirmed the three points at Goodison Park on Saturday.

Although seventh placed Everton seem unlikely to catch those teams above them in a bid to finish fifth in the Premier League, that does not mean boss Koeman has stopped dreaming of securing a Europa League spot.

“The worst situation for a football player is playing for nothing,” Koeman said.

“I like to play for something until the end of the season. We know the team behind us is West Brom, who we play at home in two weeks, and above there is still a gap.

“We know teams still need to play after this weekend and maybe it’s not ended? Even with five or six points, is possible to reach them. If we keep the momentum then anything is possible.”

Lukaku has now scored 60 Premier League goals for Everton — equal with club legend Duncan Ferguson — and his finish was his eighth at Goodison Park in just five games in 2017.

The Belgian has proven to be Everton’s most potent weapon for the past 18 months and Koeman believes he can still improve even further.

“We know he needs to work hard. We know one of his big qualities is scoring goals,” he said.

“He is strong, fast and he is one of the best. I think he can improve his runs and give options to midfield players and defenders.”

In a drab opening, Gueye’s finish after 40 minutes was a cracker as he swept home Seamus Coleman’s cross following a fine through ball from Tom Davies.

Sunderland’s Jermain Defoe crashed an effort against the crossbar with 15 minutes left, shortly before Lukaku held off Bryan Oviedo to bundle home a second.

Bottom of the table Sunderland were dreadful for most of this contest despite a recent visit to New York to rejuvenate their legs and minds.

There seems little chance they can avoid relegation and this loss will have hurt manager David Moyes more than most others this year considering his 11 years as Everton boss between 2002 and 2013.

A return to the Championship is looking increasingly inevitable for the Black Cats, but Moyes has not given up hope quite yet.

“I thought we were really poor in the first half but I wanted to frustrate the crowd,” he said.

“I wanted to keep the game low level and for large periods we did that. But we didn’t really do anything with the ball.

“While we were 1-0 down we were always in chance in the game. I wanted them to take the ball a bit more and be braver in the second half and I thought we did that.

“I think today’s game was always a tough game for us. We have 12 games to go and I’m looking forward to a good run.

“I’m sure we have one to come. We are not that far away when winning a few games might turn things around. Sunderland have been here before and hopefully that experience might help us.”