Knicks’ two big men hold their own against Jahlil Okafor 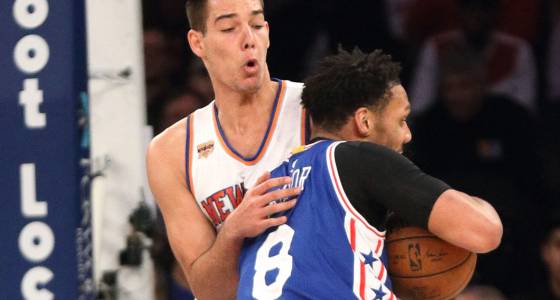 But Knicks centers Willy Hernangomez and Kyle O’Quinn felt the same way. They needed to show they could handle the heavy lifting with Knicks bigs Kristaps Porzingis and Joakim Noah on the sideline.

“Tough challenge, they go to him a lot. He was out of the rotation a while and he’s got things to prove. Trade talks and all,” O’Quinn said of Okafor. “I’m sure he went out there tonight like, ‘Man, I’m going to play’ and it showed.”

Okafor had a monster game — 28 points, 10 rebounds — but O’Quinn made one valid point.

“Good game for him individually, but good win for us,” said O’Quinn after the Knicks sidestepped a potentially devastating loss and emerged with a 110-109 victory over Philadelphia on Carmelo Anthony’s game-winning jumper with three-tenths of a second remaining.

The news on Noah’s sore left hamstring continues to be a downer. He missed his seventh straight game and likely will sit Monday against Toronto. Porzingis sat with a sprained right ankle, and though he is expected back Monday, that didn’t help against Okafor and Philly. So the Knicks looked to their two-headed center and received 20 points and 14 rebounds combined from Hernangomez and O’Quinn.

“With Jo and KP out, our two big guys, K.O. and me, we tried to do extra effort,” said Hernangomez, who made his fifth start overall and fourth straight. “We’re not as tall as KP and Jo so maybe we can switch or we can be more aggressive on him. K.O. did a great job today and that helped to get a win.”

Hernangomez helped, too. He had 11 points and nine rebounds, but ran into some of the foul trouble that has plagued him as a rookie. O’Quinn contributed nine points and five rebounds and ended the game with an easy swipe of Philly’s attempted lob inbounds to the rim after Anthony’s game-winner. O’Quinn also had five assists.

“Opportunity was there,” said O’Quinn, noting teammates “cut hard” when he had the ball. “Guys know I want to pass.”

Noah aggravated his injury in practice just before the All-Star break.

“Before that practice, they put us through a program and moving him up steps,” coach Jeff Hornacek said. “He was good for about the first five minutes and then he made a hard drive to the basket and kind of tweaked it again.”

So Hornacek went to his tag team unit.

“Okafor is very talented and skilled inside. He’s got a big body. Even though you know he’s going right every time he finds a way to position his body where he can turn right and get the shot off,” Hornacek said. “Willy and Kyle, they had to tag team him all night. Sometimes they got him. Sometimes they got beat. I thought they battled.”