EL SEGUNDO >> Kings goalie Jonathan Quick is due back in the lineup one of these days. He won’t play any warmup games in the AHL with the Ontario Reign, but will suit up and play for the Kings when he’s good and ready, coach Darryl Sutter... 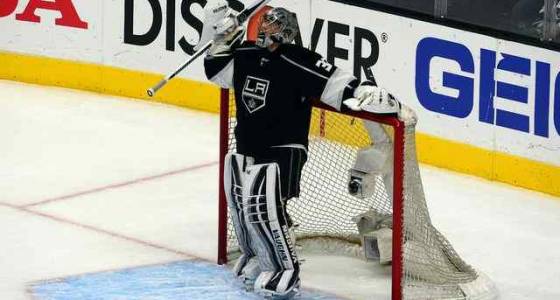 EL SEGUNDO >> Kings goalie Jonathan Quick is due back in the lineup one of these days. He won’t play any warmup games in the AHL with the Ontario Reign, but will suit up and play for the Kings when he’s good and ready, coach Darryl Sutter said Friday.

“Getting better every day,” Sutter said when asked for an update on Quick. “When you watch him, I think he’s more game-situation ready. You get to know him so well with the way he plays in the net that you recognize where he’s sharp at areas that only he can do.”

Great. Can he chip in a goal or two?

Goaltending has been a significant talking point for the Kings since Quick injured his groin in the first period of their opening game Oct. 12 in San Jose. Peter Budaj has filled in capably in Quick’s absence, keeping the Kings within striking distance of a wild-card playoff spot.

But, with 22 regular-season games to play and the Kings facing a four-point deficit in a three-team chase for the final playoff spots at the start of business around the league Friday, their lackluster scoring depth has stood out as their biggest problem in 2016-17.

The Kings have only three players with 10 goals or more, led by Jeff Carter with 29.

The Ducks, Saturday’s opponent, have nine by way of contrast, led by Rickard Rakell with 24. They added their ninth Friday when they acquired Patrick Eaves, a 21-goal scorer, from the Dallas Stars in exchange for a conditional second-round draft pick

Meanwhile, the Kings have been outscored 27-14 and been shut out three times during a stretch in which they have lost six of their past eight games and lost ground in the playoff race. The Ducks blanked them 1-0 when the teams played Sunday at Honda Center.

Six of the Kings’ goals came during a 6-3 victory Feb. 9 over the Florida Panthers.

Could the return of Quick spark the Kings for the stretch run? Of course.

His return doesn’t address their need for more scoring, however.

“It’s not an effort situation with us, that’s for sure,” Sutter said. “It’s funny about all that analytics stuff that everyone was (promoting) so much (in the past), because we’re still in control of that, but the bottom line is, the most important stat is goals-for and goals-against.

“The last 10 games we’re scoring at just under a two-goal clip and you’re going to have trouble winning games. You’re going to win one, lose one, or say, ‘We should have deserved that one.’ The bottom line is you’ve got to finish (your scoring chances).”

Shooting the puck would be a major help.

The Kings had three shots on goal during the third period of a 4-1 loss Thursday to the Boston Bruins, a game they trailed 2-1 heading into the final 20 minutes. None of the three qualified as a quality scoring chance and the Bruins sealed the deal with two late empty-net goals.

No question, the Kings didn’t have much puck luck against the Bruins. Dustin Brown, Kevin Gravel and Anze Kopitar each struck the goal post or the crossbar with shots over the course of the game. Gravel scored the Kings’ only goal, a power-play strike that was his first NHL goal.

Carter was blanked for the fifth consecutive game, his longest drought of the season.

“You kind of make your own luck, you know?” Kings defenseman Drew Doughty said. “If you play better, those pucks are going to go in. Not that we played poorly (Thursday) night, but we obviously didn’t play well enough.”