LOS ANGELES >> Jonathan Quick went back to work Saturday, making saves for the Kings during a 4-1 victory over the Ducks at Staples Center. He wasn’t really into the game, he wasn’t really back in action after sitting out for 59 games... 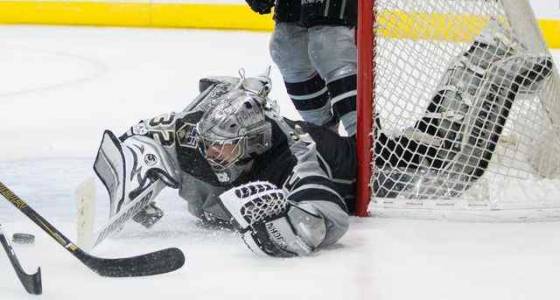 LOS ANGELES >> Jonathan Quick went back to work Saturday, making saves for the Kings during a 4-1 victory over the Ducks at Staples Center. He wasn’t really into the game, he wasn’t really back in action after sitting out for 59 games because of a groin injury until an old rival paid his respects, though.

Ducks right wing Corey Perry slashed Quick and that’s when Quick felt like he was really back.

Quick stopped 32 shots in his return and his teammates eased his burden with a four-goal outburst in the third period. Jeff Carter scored one goal and set up the second of Tyler Toffoli’s goals, and Dustin Brown also scored for the Kings.

Andrew Cogliano scored a first-period goal for the Ducks, who were 21-1-1 when leading after two periods going into the game. Patrick Eaves was scoreless, but had five shots on goal in 16 minutes, 9 seconds of ice time in his Ducks debut after Friday’s trade from the Dallas Stars.

In the final analysis, from start to finish, this was Quick’s day.

“When you first get hurt everything runs through your mind,” he said. “You start thinking thoughts that maybe you shouldn’t. I’m glad it worked out that I was able to come back and play again. It’s been great. I got to spend a little bit more time with the family, but at the same time you feel like something’s missing, so it’s good to be back.”

Peter Budaj was 27-20-3 in 53 appearances in Quick’s absence, keeping the Kings within striking distance in the playoff chase after he was recalled from the Ontario Reign of the AHL, where he resurrected his career with a league-leading 42 victories last season.

“Obviously, having Quickie, we know we can trust him,” Toffoli said when asked what it was like to have the 2012 Conn Smythe Trophy winner as the MVP of the playoffs. “We knew we could trust (Budaj) too. It doesn’t really make a difference.”

Quick said he learned he would return to the Kings’ net Friday, after going through a rigorous step-by-step practice regime that began with his first practice in his goaltending equipment Feb. 2. Practice was one thing, but actually playing in a game against opposing players was another.

The slow build-up to Saturday’s return was difficult, but Quick said he was patient.

The Kings, losers of six of eight going into Saturday, needed a spark. Quick gave it to them, but it took a while to get there, to erase a 1-0 deficit and to weather a physical storm from the Ducks that included Ryan Kesler’s one-punch victory over Carter in a second-period fight.

Carter declined to speak to reporters after scoring his team-leading 30th goal, an empty-netter that sealed the deal with 1:07 to play. Carter last scored 30 goals or more in 2010-11, when he had 36 with the Philadelphia Flyers. His career high of 46 was set in 2008-09 with the Flyers.

Carter’s fighting major was only the third of his career, according to hockeyfights.com.

“That’s the only way we’re going to make the playoffs,” Kings coach Darryl Sutter said when asked about the team’s top players producing Saturday. “If those guys are held scoreless or shut down or outplayed by the other team’s top guys, we won’t make the playoffs.”

The Kings (30-27-4) are fifth in the Pacific Division, three points out of a wild-card spot. The Ducks (32-21-10) are firmly entrenched in a playoff spot, third points behind the division-leading San Jose Sharks as they begin their NHL-mandated five-day bye week Sunday.

It was not the way they wanted to start their break.

“It would have been nice having the break with a win over those guys,” Ducks defenseman Josh Manson said of the Kings. “To lose it in the third, that never feels good. There’s losses and there’s those you kind of felt you gave away. And that was one. It’ll sting a bit but we’ve got the break here to relax, recoup and, hopefully, come back with no let-up.”