CALGARY—If Kevin Koe and his teammates are experiencing something like curling’s version of the Stanley Cup hangover, they say the Brier is more than enough to snap them out of it.Koe, third Marc Kennedy, second Brent Laing and lead Ben Hebert... 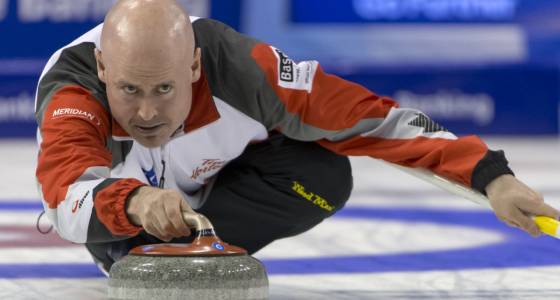 CALGARY—If Kevin Koe and his teammates are experiencing something like curling’s version of the Stanley Cup hangover, they say the Brier is more than enough to snap them out of it.

They have struggled a bit since winning those titles, taking a couple of World Curling Tour events earlier this season but making the playoffs in just one of four Grand Slam tournaments. They went 2-4 in December’s Canada Cup of Curling, which they’d won the previous year.

Koe’s team has shown signs of coming around recently and was on its game at the Pinty’s All-Star Skins Game in Banff, Alta., winning $75,000 out an available $100,000 in early February.

Kennedy said it can take awhile to stoke the competitive fires again after winning the sport’s biggest prize.

“I don’t want to make any excuses,” he said. “I really don’t, because I don’t think it has as big an impact as people say it does.

“But it’s certainly hard to get motivated as quickly as you normally would. We might have been a little slow getting things going this year.”

The Calgary team out of the Glencoe Club will wear the Maple Leaf in St. John’s as Team Canada when the main draw starts Saturday at Mile One Centre. They open against Quebec’s Jean-Michel Menard, the 2006 champion.

Beating a stacked Brier field to play in a world championship in Edmonton is motivating for Koe’s team.

“We won everything last year and we didn’t have too much to play for early in the year,” Koe said. “We’ve been kind of gearing up for this event. This will be a big test for us to see if all our hard work has paid off.

“I’ve been to three worlds and they’ve all been overseas. I’ve never gotten to play in one in Canada, especially just up the road in Alberta. That would be great.”

With Pat Simmons at third, they won the Brier again in 2014, but finished out of the medals at the world championship in Beijing.

Koe and his current teammates lost just one game en route to the world title last year in Basel, Switzerland.

They’re one of two men’s teams confirmed so far for December’s trials in Ottawa, where Canada’s Olympic teams will be determined. Winnipeg’s Reid Carruthers also has a berth.

The Brier winner won’t necessarily be the favourite at trials, Kennedy said, but the environment at the national championship is good preparation for the Tim Hortons Roar of the Rings.

“It’s certainly a chance for teams to get the feeling of what it will be like at the trials, you know, the atmosphere, the teams, the ice conditions, the pressure,” he said.

Kennedy and Herbert were part of the last team to win back-to-back Canadian men’s championships when they played second and lead respectively for Kevin Martin in 2008 and 2009.

“Extremely difficult,” Kennedy said of repeating as champions. “Having won before, that helps. Our goal honestly is to get to the playoffs and hopefully the experience kind of carries us through.”