Warriors big man JaVale McGee has been one of Shaquille O’Neal’s favorite targets this season for some of the comical errors he’s made on the court, but the banter turned personal Thursday night as they exchanged insults — and threats — on Twitter.After... 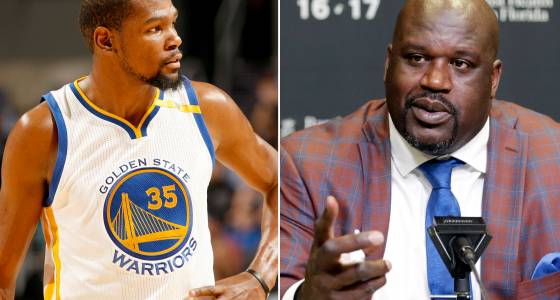 Warriors big man JaVale McGee has been one of Shaquille O’Neal’s favorite targets this season for some of the comical errors he’s made on the court, but the banter turned personal Thursday night as they exchanged insults — and threats — on Twitter.

After Warriors practice on Friday, McGee’s star teammate Kevin Durant and coach Steve Kerr came to his defense. While Kerr kept his interview professional, Durant couldn’t resist taking some shots at the former All-Star center who now works as an analyst on TNT’s “Inside the NBA.”

“I understand Shaq works for a company that wants him to do that type of stuff, make fun of the players,” Durant said. “It’s cool and funny, but when you just keep doing it time and time and time again for no reason — and then the guy actually disagrees with you and you threaten him? I didn’t know cops could threaten civilians like that.”

Durant’s backhanded comment was in reference to O’Neal’s most recent profession: He was sworn in as a deputy or reserve police officer in multiple cities across the United States. It was O’Neal’s basketball career, however, on which Durant hurled his harshest insults.

“Shaq was a s–tty free-throw shooter,” Durant said. “He missed dunks. He air-balled free throws. He couldn’t shoot outside the paint. He’s bigger than everybody, he didn’t have no skill. But he was bigger and stronger than everybody else. He’s still a great player, but you had your flaws, too, as a player. And he played on five or six teams, too. So it’s not like he was this perfect center. You had your flaws, too.”

The feud resembled the public fight between LeBron James and Charles Barkley in late January and early February when the Cavaliers star lashed out at the NBA great, who now works alongside O’Neal, for suggesting Cleveland spoiled him. Like Durant, James struck a personal tone in his attacks on Barkley.

“I’m not going to let him disrespect my legacy like that,” James said of Barkley. “I’m not the one who threw somebody through a window. I never spit on a kid. I never had unpaid debt in Las Vegas. I never said, ‘I’m not a role model.’ I never showed up to All-Star Weekend on Sunday because I was in Vegas all weekend partying.”