OAKLAND, CALIF.—Golden State Warriors star Kevin Durant will be out indefinitely after he sprained the medial collateral ligament in his left knee and bruised a bone in his leg during a game in Washington.The team said Wednesday that its medical staff... 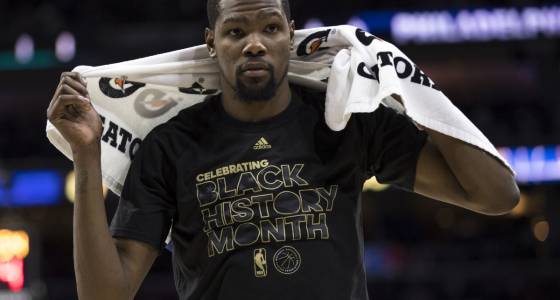 OAKLAND, CALIF.—Golden State Warriors star Kevin Durant will be out indefinitely after he sprained the medial collateral ligament in his left knee and bruised a bone in his leg during a game in Washington.

The team said Wednesday that its medical staff hasn’t ruled him out to return before the end of the regular season.

The All-Star forward hyperextended his knee early in the Warriors’ 112-108 loss to the Wizards on Tuesday night and later underwent an MRI, which revealed a Grade 2, or moderate, sprain in the knee and a bruised tibia.

Durant is scheduled to be re-evaluated in four weeks, so if he were fully healthy then, that would leave about two weeks remaining in the regular season. The Warriors became the earliest team in NBA history to clinch a playoff berth when they beat the Nets on Saturday and are now focused on locking up the No. 1 seed in the Western Conference.

Durant leads the Warriors in scoring and rebounding with 25.3 points and 8.2 boards in his first season with Golden State. At 50-10, the Warriors have the NBA’s best record.