In the last waning moments of February, Kentucky put the finishing touches on a wild and surprisingly difficult home win that held no shortage of lessons for March.Rallying from an early 19-point deficit on Tuesday, the Wildcats beat a Vanderbilt team that... 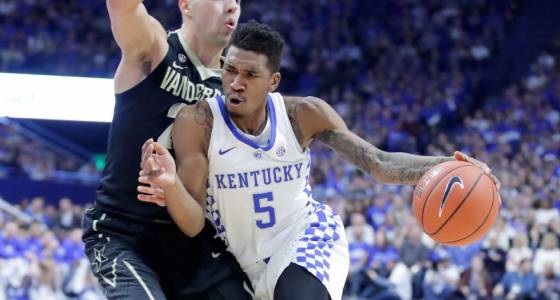 In the last waning moments of February, Kentucky put the finishing touches on a wild and surprisingly difficult home win that held no shortage of lessons for March.

Rallying from an early 19-point deficit on Tuesday, the Wildcats beat a Vanderbilt team that was desperately trying to play its way into the NCAA tournament. The evening goes down in the books as a 73-67 win, and UK even locked up the SEC tournament’s No. 1 seed with the victory.

Just the same, coach John Calipari will have ample opportunity to draw his team’s attention to some pertinent facts that were thrown into stark relief by the Commodores.

Kentucky entered the contest fresh from a convincing win over Florida, and it seemed the Wildcats had turned a page on defense in particular. Then Bryce Drew’s guys showed up and drained 11 3-pointers while also connecting 52 percent of the time inside the arc.

The ‘Dores outshot Kentucky with room to spare from the field, but the fact that Vanderbilt gave the ball away 18 times (and pulled down just four offensive boards) made all the difference. True, the Wildcats helped that number for giveaways along by going to a full-court press in the second half, but not every March opponent is going to prove as hapless in the face of a little pressure as did the Commodores.

Georgia took the Wildcats to overtime at Rupp Arena, Tennessee beat Calipari’s team in Knoxville, Tennessee, and UK won games at LSU and Georgia by seven and five points, respectively. The Vanderbilt game therefore may have represented the culmination of this “win it at the end” tendency.

Kentucky spotted the Commodores to a 25-6 lead and needed the full 40 minutes to put the game away. That can work when you’re playing against the midsection of the SEC, but once UK gets to the NCAA tourney's round of 32, the opponents won’t be quite as manageable.

After Malik Monk scored 30 points in one half of basketball against an opponent as good as Florida, it may have seemed plausible to assume that he could carry this offense as far as necessary. Upon further inspection, however, that may not be the case.

Over the past two games, Monk has scored 60 points while his team has recorded a relatively tame 1.07 points per possession. That level of scoring is below UK’s season average in SEC play (1.13), and it suggests that, occasional and incredible Monk eruptions notwithstanding (we’ll always have the North Carolina game), the Wildcats do best on offense when the scoring load is shared.

De’Aaron Fox has battled various maladies and even a knee contusion over the past few weeks, but through it all he has excelled at getting to the rim and making a high percentage of his 2-point tries. When he’s on the floor, the freshman point guard is taking his fair share of the shots, it’s just a matter of getting him enough healthy, full-speed minutes alongside Monk, Bam Adebayo and Isaiah Briscoe.

If you’re a Kentucky fan and you’re hoping that the Vanderbilt close call is going to leave behind one positive after-effect, you might wish for the Wildcats to see and understand that an opponent can still make 3s against this defense.

Don’t blame Calipari’s guys for thinking otherwise, because that hadn’t happened in a while. In UK’s previous five games, opponents had shot just 24 percent from beyond the arc. That futility from the perimeter was a big factor driving the genuinely good defensive numbers that Kentucky recorded over much of February.

Meanwhile, those same opponents continued to connect 49 percent of the time on their 2s, just as they’ve done for the entire SEC season. That’s not a bad success rate for a defense to record, but, of course, it’s a far cry from the numbers (usually in the low 40s) we’re used to seeing from Coach Cal’s teams in Lexington. The safe conclusion is likely that Kentucky’s defensive improvement is still a work in progress.

The good news for UK fans is that their team is greeting March with a 25-5 record, a No. 1 seed in the conference tournament, and has an excellent shot at an NCAA tournament No. 2 seed. That’s the minimum expected of a team as storied as Kentucky, of course, and the Wildcats can indeed deliver on their immense potential.

Doing so will require that Calipari’s men buckle down for the full 40 minutes and not count on opponents to behave like visiting SEC teams (almost) always do at Rupp Arena. If that’s what UK’s expecting of opposing teams in March, the Wildcats will be in for a rude awakening.