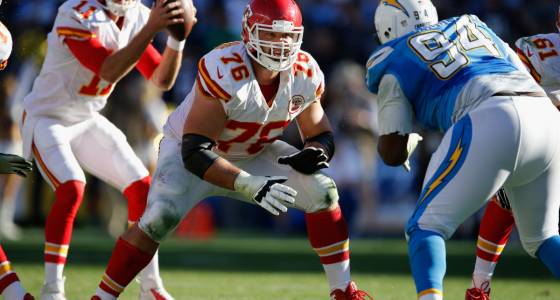 Ian Rapoport of The NFL Network tweeted Monday the Chiefs and Duvernay-Tardif are finalizing a five-year, $41.25 million (U.S.) contract extension. Duvernay-Tardif still has one season remaining on his four-year, $2.35 million rookie deal.

It’s been a meteoric rise for the 25-year-old native of Mont-St-Hilaire, Que. Kansas City selected the six-foot-five, 321-pound lineman in the sixth round, 200th overall, of the 2014 NFL draft from McGill University.

And the converted defensive lineman has done it while also continuing to study medicine at McGill.

Duvernay-Tardif made the Chiefs’ 53-man roster as a rookie but didn’t play. Dubbed “Canadian Doctor” and “Larry” by his teammates, Duvernay-Tardif became a starter in 2015, playing 13 games before making a career-best 14 starts this year — playing every game he dressed for.

The Chiefs finished atop the AFC West with a 12-4 record to secure the No. 2 playoff seed in the AFC. But their season ended bitterly as the Pittsburgh Steelers edged Kansas City 18-16 in a divisional playoff contest.

Earlier this month, Duvernay-Tardif returned to Montreal to continue his medical school studies and expects to complete his medical degree in 2018.