Justin Jackson sounded a little bit tired of the question, as if the answer should be plain enough to anyone who seeks it. He sat in front of his locker in the moments after North Carolina's 85-67 victory against Pittsburgh on Saturday, and again Jackson... 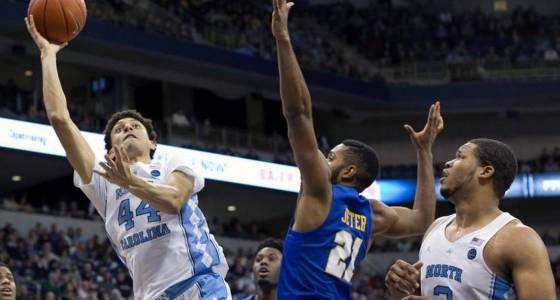 Justin Jackson sounded a little bit tired of the question, as if the answer should be plain enough to anyone who seeks it. He sat in front of his locker in the moments after North Carolina's 85-67 victory against Pittsburgh on Saturday, and again Jackson spoke of what's different – which, it turns out, isn't very different at all.

The question was about the confidence in his shot, and how much of that intangible he possesses. He'd just made five 3-pointers at the Petersen Events Center. He made his first, in the first couple of minutes on Saturday, from the right baseline, in the corner. That helped, he said – “obviously it helps” to make the first attempt.

And then he made four more, two of them in the decisive stretch late in the first half when the No. 8 Tar Heels turned a competitive game into the kind of game it became – a rout, a mismatch, another dominant UNC victory in what's becoming a run of them. Jackson, the junior wing forward, led UNC with 23 points, and by now his success is all starting to feel so routine.

Jackson credited some of the success to “muscle memory,” which by definition is doing something with so much repetition that it becomes the expected norm. Shooting days like these, for him, are becoming the expected norm – so much so that UNC coach Roy Williams seemed to forget exactly what kind of game Jackson had just played.

When he met with reporters afterward, Williams offered much praise about his team's rebounding and its defense and its knack, as usual, for scoring inside, where the Tar Heels outscored the Panthers 42-24 in the paint. Williams spoke of Kennedy Meeks, who finished with 18 points and 10 rebounds – his 21st double-double – and Tony Bradley, the freshman who finished with 10 points.

And what about Jackson? What about the guy who helped turn a close game into what it became?

“I can't even find his name,” Williams said, scanning the box score with his finger and searching for Jackson before he finally found him. “Five-for-11 from 3, that's pretty doggone good. We'll take that most times.”

When these teams played less than a month ago the Tar Heels were, in some ways, fortunate to escape with an 80-78 victory, one that wasn't decided until Pitt's Cameron Johnson missed a 3-pointer at the buzzer. But that was then, though, and this was now – and some things have changed for the Tar Heels.

For one, they're playing what appears to be their strongest defense of the season, and they've held three consecutive opponents to 67 points or fewer for the first time. Pitt made 39.6 percent of its attempts from the field and it made only seven of its 24 3-point attempts.

The other part that has changed his this: Jackson has gone from very good to great – a player who has become a frontrunner for ACC Player of the Year honors. The victory at Pitt represented the third consecutive time he'd scored at least 20 points. It was another strong shooting day in a run of them.

“There's been many times where me and Kennedy, or the bigs, go in there for an offensive rebound and a lot of times we just hesitate to go in because we think it's going in all the time,” said Isaiah Hicks, the senior forward who finished with eight points and six rebounds and a career six assists.

Hicks, who recovered well from his frustrating performance against Virginia early in the week, wasn't just talking about Jackson. He was talking, too, about Joel Berry, the junior point guard who finished with 19 points and who made four 3-pointers of his own.

Entering the season Berry's shooting was a known commodity. It was an integral part of the Tar Heels' success a season ago, when they reached the Final Four. Jackson's shooting ability, meanwhile, was at one time more the stuff of legend – a talent Williams often praised but one Jackson struggled to show.

But that's no more. Jackson and Berry have become as formidable a perimeter shooting duo as there is in college basketball, and they helped lead the Tar Heels to a victory on Saturday that guarantees them a double-bye in the upcoming ACC tournament.

This was the kind of performance, like the victories against Virginia and Louisville before it, in which the Tar Heels appeared to refine themselves for work ahead. There was Meeks and Hicks and Bradley down low. There was Berry from the outside.

And, as has become routine, there was Jackson, stoically making 3-pointer after 3-pointer. His expression never changed much, as usual, while he made those outside shots. With about six minutes remaining, though, he broke away for a dunk and released a rare display of emotion.

“I just felt his body,” he said later of the defender who was helpless to stop Jackson. “It wasn't like, 'Oh, man I just dunked on him.' But it was a dunk. So I don't dunk much, so there's going to be a little more emotion in it.”

It was only one such moment in a business-like victory, another one in a line of them for UNC.