Josh Gordon applying for reinstatement to NFL; Will Eagles or Giants have interest?

The wide receiver market just got a (potentially) interesting name added to it.  According to ESPN's Adam Schefter, wide receiver Josh Gordon is applying for reinstatement to the NFL in hopes of returning to the league for the 2017 season.... 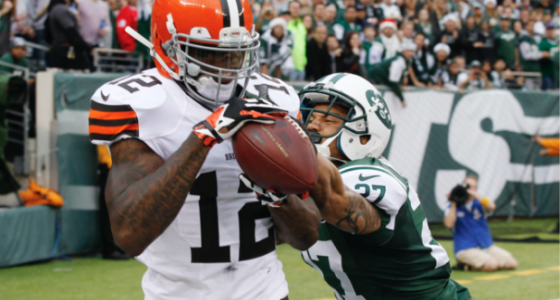 The wide receiver market just got a (potentially) interesting name added to it.

According to ESPN's Adam Schefter, wide receiver Josh Gordon is applying for reinstatement to the NFL in hopes of returning to the league for the 2017 season.

Could the Eagles or Giants have interest?

Although Gordon is still under contract with the Cleveland Browns, the team has made it clear in the past they are moving on from the troubled receiver, meaning if he is reinstated, he won't be playing for the Browns.

"Josh is living with me and is in the best place mentally that he has been in dating back years before entering the NFL. He has taken the proper steps to treat his issues and has followed a very strict protocol that the league and our team here has laid out for him. He's also in the best shape of his life and feels even better than he did when he had his breakout year in 2013. This will be a special year for Josh and we are all very proud of the way he has taken the necessary steps to turn his life around."

Gordon hasn't played since the 2014 season, when he suited up for just five games before being suspended. He hasn't been back on the field for a regular season game since, and has been suspended multiple times for violating the NFL's substance abuse policy.

Although Gordon clearly comes with some off-the-field questions, there is no denying that when he played, he was a difference-making player at receiver. In 2013, Gordon finished with 87 catches for 1,646 yards and nine touchdowns. Gordon is 6-foot-3, 225 pounds.

Gordon's path to being back on an NFL field is still a long one, but if he is reinstated, teams will have interest -- and the Eagles, Giants or Jets could be among them.

The Giants are in need of a No. 3 receiver, and with strong veteran leadership on the team, could be a good landing spot for Gordon. He would also come to the Giants knowing he doesn't have to be their top option.

The Eagles have a massive need at receiver, and are in a position where they need to take chances on guys in hopes they can hit on a potential superstar. The Eagles' organization has also shown in the past that they are willing to give players with off-the-field issues a second chance, such as Michael Vick and Jalen Mills.

There are plenty of questions still to be answered with Gordon. When will he play? When he does, will he be the same player he was in 2013?

Considering their massive need at receiver, the Eagles should at least ponder those questions if Gordon does become available.