Could Josh Gordon make his highly-anticipated return to the NFL in 2017? Jets release Darrelle Revis: What to make of it Actually, could be make his way to One Jets Drive? The talented but trouble receiver is reportedly applying for reinstatement,... 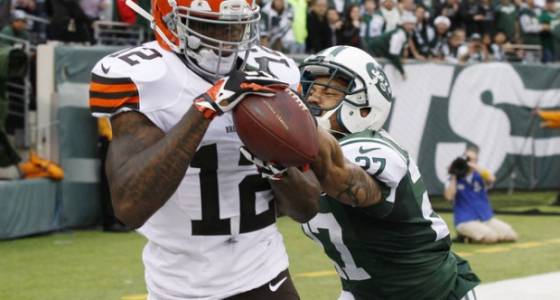 Could Josh Gordon make his highly-anticipated return to the NFL in 2017?

Jets release Darrelle Revis: What to make of it

Actually, could be make his way to One Jets Drive?

The talented but trouble receiver is reportedly applying for reinstatement, according to ESPN. He's still under contract with the Browns, but head coach Hue Jackson indicated last season they'd release or trade him once he is reinstated.

Jets cornerback Buster Skrine played with Gordon for three seasons in Cleveland. This past summer, he told NJ Advance Media if the wideout hit the open market, he'd love for him to join the Jets.

"If he was a free agent? Yeah, I would like him here," Skrine said last summer. "Josh is an all-pro receiver. If he came here? That would be good, too."

On paper, a Jets-Gordon marriage makes, at the minimum, some sense. He's not going to demand a huge contract, is immensely talented, and if the Jets release Eric Decker or Brandon Marshall, they'll need another receiver. General manager Mike Maccagnan has been willing to take on troubled players before (Austin Seferian-Jenkins, Erin Henderson). He believes the Jets have the support system to aid troubled players.

But Gordon is in another realm of troubled. Since the Browns drafted him in the second round of the 2012 supplemental draft, Gordon has been suspended (by the NFL or Browns) six times.

"He's not a bad guy. He's a good dude," Skrine told NJ Advance Media in August. "He's just made bad decisions and smoked marijuana. Shoot, there are a lot of people in this world that have done that, but you can't in this league. He's definitely a good guy, and he took his punishment."

Gordon looked to be on track for a return in 2016, but slipped up again and failed a drug test. In September, he entered an in-patient rehab center.  Michael Johnson, Gordon's business manager, told ESPN the wideout is finally doing better, and ready to return to the NFL.

"Josh is living with me and is in the best place mentally that he has been in dating back years before entering the NFL," Johnson said, via ESPN. "He has taken the proper steps to treat his issues and has followed a very strict protocol that the league and our team here has laid out for him.

"He's also in the best shape of his life and feels even better than he did when he had his breakout year in 2013. This will be a special year for Josh and we are all very proud of the way he has taken the necessary steps to turn his life around."

Just because Gordon applied for reinstatement, doesn't mean the NFL will reinstate him.