Josh Doctson increases work as he recovers from Achilles issues

The Washington Redskins' decisions about their free-agent receivers will be easier to make if second-year WR Josh Doctson is healthy. That’s why seeing him take the next step in his recovery, and performing agility drills, is a positive development... 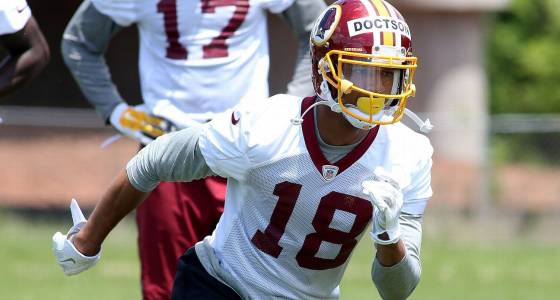 The Washington Redskins' decisions about their free-agent receivers will be easier to make if second-year WR Josh Doctson is healthy. That’s why seeing him take the next step in his recovery, and performing agility drills, is a positive development for Doctson and the Redskins. Of course, the next step is for Doctson to continue being able to do these drills for an extended time without feeling any pain.

Doctson posted video on his Snapchat account, showing him doing the drills and catching passes Thursday. He has been bothered by his Achilles’ in both feet since, though it started when he tweaked his right one May 25. It sidelined him thereafter until late in training camp -- and then he was only able to play in two games, catching two passes for 66 yards. After that, the Redskins rested him and then eventually placed him on injured reserve.

Again, this was on Thursday and not today. A good sign, regardless. https://t.co/kj7zMfclUf

Doctson’s progress impacts what the Redskins do at receiver. They have two free agents in DeSean Jackson and Pierre Garcon. There is no guarantee both will depart, but the Redskins are content to see how the market develops for both -- and then make a final decision.

They have not spoken to either player, but likely will meet with them at the combine next week. However, multiple teams will do the same and both players know they will be in high demand.

That means Doctson’s progress is pivotal. The Redskins viewed him as a top-10 player before the 2016 draft so when he was still available when they selected 22nd (after trading back one spot knowing he’d still be there) they didn’t hesitate to draft him. They’ll obviously monitor him closely and word is that Doctson’s spirits are good, perhaps a function of his recovery. But the key will be how he feels after extended work; after all, he had returned at other times.

At the time they drafted him, the Redskins knew there was a chance both Garcon and Jackson could be gone. Doctson would provide a replacement, giving them a 6-foot-2 receiver capable of tracking the ball well down the field, as he did at TCU. But those plans were stymied because of an injury that did not exist before the draft.

It led to all sorts of frustration as doctors at one point before camp feared it would take eight to 12 weeks to heal. That report soon changed, but later Doctson said doctors told him extended rest was the best cure. He visited multiple specialists about the injury.

After the season, Doctson said, “It’s a unique injury from what I’m hearing by doctors. It’s been a frustrating year. There’s not a certain diagnosis other than tendinitis. It’s something that hopefully won’t reoccur if I let it calm down. I’ve never had this problem ever. It was foreign to me, and that’s why I tried to play through it.”

The Redskins need him to do more than play through pain this season. There are many steps to go, but Doctson took another one this week.