Interviews between NFL clubs and draft prospects at the NFL Scouting Combine can range from the routine to the bizarre as teams try to gauge potential draftees with tough questions and, at times, strange ones. Put one of Jordan Morgan's combine interviews... 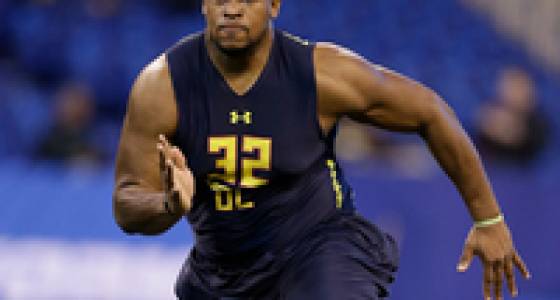 Interviews between NFL clubs and draft prospects at the NFL Scouting Combine can range from the routine to the bizarre as teams try to gauge potential draftees with tough questions and, at times, strange ones. Put one of Jordan Morgan's combine interviews in the bizarre category.

The Kutztown guard told the PA Media Group that one particular NFL team asked him to stare at an object without blinking for as long as possible.

"The strangest thing I had asked of me at the combine was how long I could have my eyes open in a staring contest. I thought it was weird, but it's one of those things you don't question on the spot," he said. "I didn't blink at all. He told me I could stare at anything. I just focused on a water bottle. I don't know how long it was, but it was pretty long. My eyes were fogging up. I couldn't see after. He was just like, 'I got what I need. You can stop now.'"

By any measure, that's just plain weird. It's not unusual for prospects to be asked questions that have nothing to do with football in the combine interview setting, but in the range of oddness that those interviews can entail, this ranks high on the crazy scale. Morgan wouldn't disclose which club challenged his staring skill, but did name the teams he spoke with formally in Indianapolis last month: the Tennessee Titans, Atlanta Falcons, Kansas City Chiefs, Seattle Seahawks and Tampa Bay Buccaneers.

Morgan has been projected as an NFL backup with starting potential if he improves, and flashed impressive run-blocking skills at the Reese's Senior Bowl in January. The NFL draft will be held April 27-29 in Philadelphia.

And if the team that wanted to know how well he could stare happens to select him, here's guessing Morgan arrives at rookie minicamp asking why.