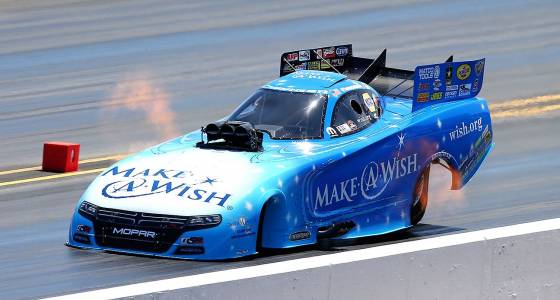 Johnson earned the 15th No. 1 qualifier of his career. The Dodge Charger R/T driver will face Phil Burkhart Jr. in the opening round of eliminations Sunday.

"We did some things on that run that we wouldn't normally do," Johnson said. "It definitely worked. We knew the conditions were good. I could tell during the run that the car was a bunch better. You could feel it in there that it pulled really well early in the run so I knew it was a good one. We went up with no expectations but I felt pretty confident going in there. (Crew chief John Collins) saw something in there that he wanted to try."

Coming off a victory in the season-opening event in Pomona, California, Pritchett held onto the top spot in Top Fuel with her national record run Friday of 3.658 at 329.34.