Oklahoma running back Joe Mixon will participate in the Sooners' pro day on Wednesday. It will be his first opportunity to work out for teams since he was excluded from the NFL Scouting Combine due to past conduct.Mixon struck a female student in 2014 and... 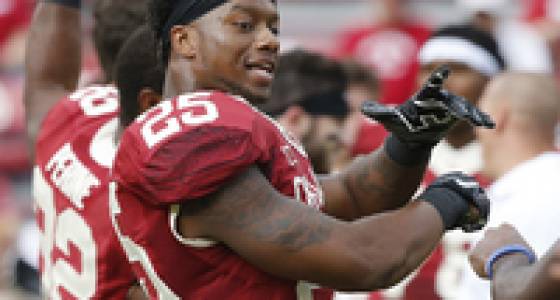 Oklahoma running back Joe Mixon will participate in the Sooners' pro day on Wednesday. It will be his first opportunity to work out for teams since he was excluded from the NFL Scouting Combine due to past conduct.

Mixon struck a female student in 2014 and was charged with acts resulting in gross injury, a misdemeanor. Mixon was suspended for the 2014 season and served one year of probation, counseling and 100 hours of community service after a plea agreement settled the case.

The NFL implemented a policy last year that bars prospects who have misdemeanor or felony convictions involving violence or use of a weapon, domestic violence, a sexual offense and/or sexual assault from combine participation. While Mixon does not have such a conviction, the NFL can bar any prospect from participating in the combine after evaluating the underlying circumstances involving the player.

Let's take a look at the strengths and weaknesses of the player before delving into the intricacies of the situation surrounding him.

Mixon is one of the most well-rounded running backs in the 2017 draft. With his size and strength, he can get the tough yardage and he's a tremendous third-down option. He goes from glide to burst quickly. Mixon can pick up chunk plays between tackles and around corners. He can run with power or elude tackles with flashy footwork and easy hip movement. Mixon is a stellar pass-catching option who creates separation with his routes and can make a one-handed catch if the ball is outside his frame. When it's time to handle pass-blocking duties, he will step up and handle his work.

From a critical perspective, Mixon can be too patient at times as an inside runner looking for wide-open points of entry rather than trusting his offensive line. Mixon's dancing downhill can allow running lanes to become creases. While he has some elusiveness, he lacks creativity in the initial stages of the run and his vision is average.

If you are wondering how important this pro day is for Mixon, I would tell you that it's very difficult to say. On one hand, there are teams I've spoken with who have Mixon off of their draft boards and will not consider him under any circumstances.

However, there are other teams who are said to be very interested in Mixon and how he performs in his pro day might help determine their interest level relative to his NFL draft slotting. Mixon should run the 40-yard dash around the 4.50 range. His change-of-direction and pass-catching drills should go exceptionally well.

What will be extremely important for Mixon -- and what won't be seen by the general public -- will be his individual interviews with NFL teams. NFL teams have done an exceptional amount of digging on Mixon and his background. They will be probing him for truthfulness and to get a feel for his maturity level and contrition for the incident.

Mixon should work out well at his pro day. We saw how talented he was throughout the 2016 season and in the Sugar Bowl. His talent alone would have him in the conversation for late first-round to early second-round status. However, there's more to take into account in his evaluatoin than his talent.

If a team is satisfied with what it hears from Mixon in a private interview, will it place him on the draft board provided it gets the go-ahead from the team's owner? How high up the board will he be slotted?

I spoke with one NFL general manager who told me that he would never consider drafting him under any circumstances. If Mixon gets into trouble again off the field, it could be very damaging for the franchise that takes a chance on him. So who, if anyone, is willing to take that chance? We will find out in April.