Joakim Noah going on shelf as Knicks spiral into shutdown

Knicks center Joakim Noah will have surgery Monday on his left knee, putting his availability for the rest of the season in serious doubt.The oft-injured Noah will have an arthroscopic procedure to clean out cartilage from the knee. The timetable for his... 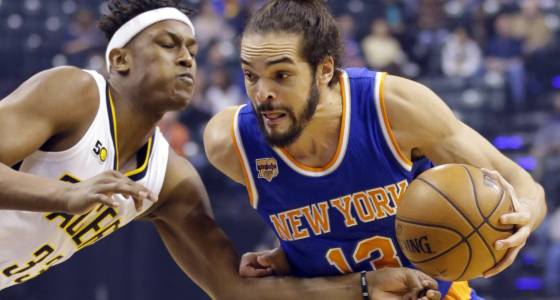 Knicks center Joakim Noah will have surgery Monday on his left knee, putting his availability for the rest of the season in serious doubt.

The oft-injured Noah will have an arthroscopic procedure to clean out cartilage from the knee. The timetable for his recovery could be as little as three weeks — or certainly as many as the six weeks that remain in the regular season. The Knicks’ decision with Noah could hinge on whether they are still in a playoff race in late March.

Noah had missed seven straight games due to what was described as a sore left hamstring.

Noah has been a liability on offense — his free-throw percentage cratered to 43.6 percent — and lost a step on defense. Because of his long-term contract, the Knicks view him as their backup of the future behind rookie Willy Hernangomez, who has started in Noah’s place as he sat due to the latest hamstring woes.

Noah’s season got off to a miserable start during training camp at West Point. He refused to go to a team dinner with cadets because of his anti-war stance and was admonished by West Point in a statement. He injured his left hamstring during the last practice of the camp and missed the first four exhibition games.

Noah has made a positive impact with his leadership in the locker room on a club lacking in that department. He gets along very well with Carmelo Anthony and has been a mentor to Hernangomez, Kyle O’Quinn and Kristaps Porzingis.

The Knicks also waived backup point guard Brandon Jennings on Monday as they raise the proverbial white flag on another lost season.