With the NFL Combine beginning Wednesday, here are five prospects to watch for the Jets:QB, ClemsonThe case for Watson is pretty simple: He went 32-3 in three years at Clemson and led the Tigers to the national championship last season. But there are questions... 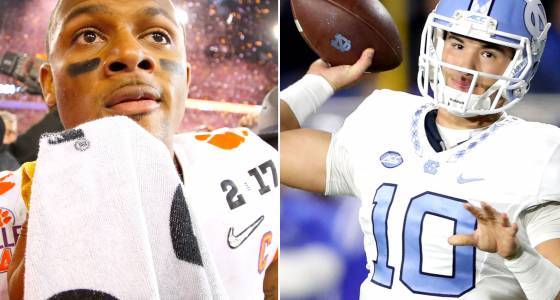 With the NFL Combine beginning Wednesday, here are five prospects to watch for the Jets:

The case for Watson is pretty simple: He went 32-3 in three years at Clemson and led the Tigers to the national championship last season. But there are questions about how he will translate to the NFL. The Jets have been searching for a quarterback for 40 years. Is Watson next?

Trubisky made just 13 starts for the Tar Heels, so there is a lot of unknowns about him. In 2016 he was an accurate passer with good arm strength. He threw 30 touchdowns and just six interceptions with a 68.2 completion percentage. He could be off the board before the Jets draft at No. 6.

Hamstring injuries limited Lattimore in his first two years with the Buckeyes. Last year, he had 14 passes defensed, four interceptions and showed outstanding ball skills. He is the top cornerback in this class, and the Jets are going to need someone to replace Darrelle Revis.

Coach Todd Bowles could use a do-everything safety in the back of his defense. Adams fits the bill. He can move all over the field, has outstanding instincts, can play the run and has good ball skills.

Running back is not an immediate need for the Jets, with Matt Forte and Bilal Powell under contract for 2017. But Fournette might be too good to pass up. He showed elite-level skills in college. If the Jets think he is the next Adrian Peterson, they should pounce on him.