Jets to cut center Nick Mangold, who spent 11 seasons with them

The Jets are planning to release longtime center Nick Mangold,  a move that will create $9.075 million in salary cap space, with no dead money attached.  Mangold confirmed he would be released on his Twitter account.  pic.twitter.com/OfMuZ6wnkP... 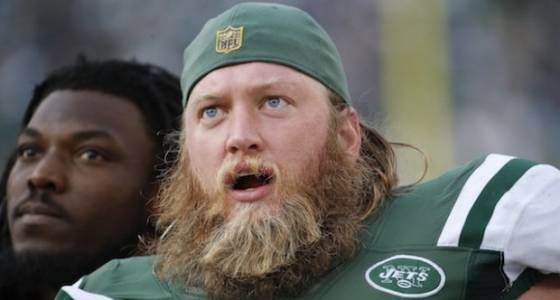 The Jets are planning to release longtime center Nick Mangold,  a move that will create $9.075 million in salary cap space, with no dead money attached.

Mangold, 33, would've been entering the final year of his contract in 2017. He was set to earn a base salary of $6.075 million, plus a bonus of $2.4 million, payable when he reported to training camp. None of the money was guaranteed. Thus, no dead money.

It was possible the Jets would retain Mangold with a pay cut (to lower his cap number), but that ultimately did not happen, as the organization attempts to get younger.

Mangold had been the Jets' center since they drafted him in Round 1 in 2006. He is a future Ring of Honor member for them. He started 164 of 176 possible regular season games during his 11 years with the Jets. He made seven Pro Bowls and twice was a first-team All-Pro selection (2009 and 2010). But a nagging ankle injury limited him to eight games last year.

Mangold said after last season that he did not want to retire.

"Shoot, I love football," he said. "I miss it dearly. I'm planning on playing. I want to keep playing football, and I want to do it here [with the Jets]."

Now, who will replace Mangold?

Last season, the Jets turned to Wesley Johnson, a pending restricted free agent. Johnson, 26, was a fifth-round draft pick by the Steelers in 2014. He has been with the Jets since October 2014, and has started nine games in his career, including eight last season.

If the Jets want to draft a center, the best prospects are regarded as LSU's Ethan Pocic; Pat Elflein (who played at Mangold's alma mater, Ohio State); and West Virginia's Tyler Orlosky.

Mangold had been remarkably durable in his career, until last season. From 2006-13, he missed just two total games. He was the Jets' longest-tenured player, a fan favorite. So he will not be easily replaced, in terms of his on-field cerebral skills and locker room leadership value.

But $9.075 million was too high of a salary cap figure for him in 2017, considering his age and the Jets' cap situation. They need to rebuild with younger players, especially on their offensive line. In addition to Mangold at center, the Jets entered last season with Ryan Clady and Breno Giacomini as their starting tackles. Both veterans broke down with injuries in 2016.

Clady, who turns 31 in September, didn't have his option picked up by the Jets, making him a free agent -- a move that created $10 million in cap space. Giacomini turns 32 in September.