The Jets have cut ties with inside linebacker Erin Henderson, whom they placed on the non-football injury list after he played in just five games last season, with four starts. The Jets declined his option for 2017, a league source confirmed.... 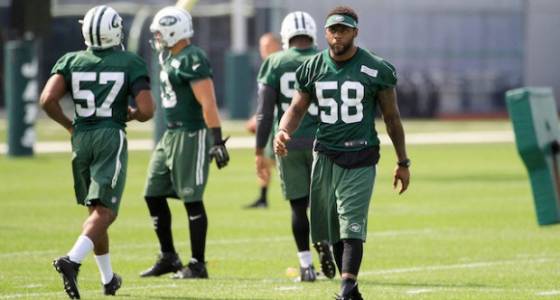 The Jets have cut ties with inside linebacker Erin Henderson, whom they placed on the non-football injury list after he played in just five games last season, with four starts. The Jets declined his option for 2017, a league source confirmed.

The reason Henderson was put on that list remains unclear. It was not related to an injury. But what's clear now is that Henderson's release will create $2.57 million in salary cap space for the Jets, with no dead money attached. So the release did not come as a surprise.

The Jets signed Henderson, who turns 31 in July, to a one-year contract before the 2015 season. He was a solid performer as a backup, and he landed a two-year deal after 2015. But the contract included no guaranteed money in 2017, so it was really a one-year deal.

The Jets had until Feb. 15 to exercise Henderson's option clause for 2017, which wasn't going to be a binding decision. The organization's real decision deadline for Henderson wasn't until March 9 (Day 1 of the league year), when he was due to receive a $250,000 roster bonus.

In 2016, Henderson began the season as the starter next to longtime middle linebacker David Harris. When Henderson was placed on the NFI list, the Jets replaced him with rookie Darron Lee, their first-round draft pick. Lee did some promising things, but the jury is still out on him.

Henderson has a history of alcohol issues, including two DUI arrests while playing with the Vikings from 2008-13. He was out of the NFL in 2014, before the Jets gave him another shot.

For a season-plus, Henderson appeared to make the most of his second chance. Now, will he get another opportunity in the NFL? Or is his career finished?