Jerian Grant entered the final game of February Tuesday night shooting 46.7 percent from 3-point range over the month.In some ways, Grant's insertion into the starting lineup to provide better spacing for Jimmy Butler and Dwyane Wade has worked. Grant, who... 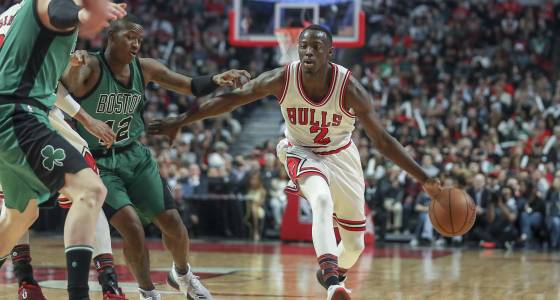 In some ways, Grant's insertion into the starting lineup to provide better spacing for Jimmy Butler and Dwyane Wade has worked. Grant, who sank a 3-pointer on the first shot of the game Tuesday night against the Nuggets, had shot 41.5 percent from beyond the arc in 18 starts before Tuesday.

While Rajon Rondo remains the best pure point guard on the roster, Grant shoots better statistically from long range. The question now is: Will Grant stay in the starting lineup?

Michael Carter-Williams missed his second straight game with left patellar tendinitis, and coach Fred Hoiberg has promised a larger role for newcomer Cameron Payne. Along those lines, Payne was to log second-half minutes for the first time as a Bull on Tuesday.

"He has been solid," Hoiberg said of Grant. "He finished the (Feb. 16) Boston game, playing alongside Jimmy. We're still working through different combinations with the trade that was made."

Hoiberg has demoted both Rondo and Carter-Williams from the starting point guard to not playing by coach's decision this season. The Bulls have discussed waiving one guard to ease the logjam, though Carter-Williams' injury could change that.

Forward thinking: Tuesday marked the deadline for the Bulls to extend Taj Gibson's contract, which expires after this season. Obviously, this isn't the Bulls' issue anymore because they traded him to the Thunder last week — but it was.

That's why the Bulls did their due diligence on an extension for Gibson, whom executive vice president John Paxson called "one of the best people we have ever had in this organization." Sources said the Bulls had amicable discussions with Gibson's representatives on an extension but quickly realized Gibson's projected value as he hits unrestricted free agency for the first time doesn't fit with their projected salary structure.

"He's probably looking at something similar to the (Joakim) Noah deal (with the Knicks)," a rival Eastern Conference executive said.

Gibson said after the trade he wouldn't rule out returning to the Bulls "at the right price" but that's unrealistic. More likely would be Gibson's contention that he may return in a post-career capacity.

Layups: Paul Zipser missed his seventh straight game with left ankle tendinitis but he has begun practicing in non-contact drills. … Kevin Durant left Tuesday's road game at the Wizards with a hyperextended left knee. The Warriors, who visit the Bulls on Thursday, will perform an MRI on Durant's injury to determine its severity.