Jeff Brohm, Purdue have work cut out for them as spring practice begins

Like any first-year head coach, Jeff Brohm needs to build trust and familiarity with his new players at Purdue, and vice versa. Since his hiring in early December, however, Brohm hasn't opted for any team-building exercises or creative group outings to speed... 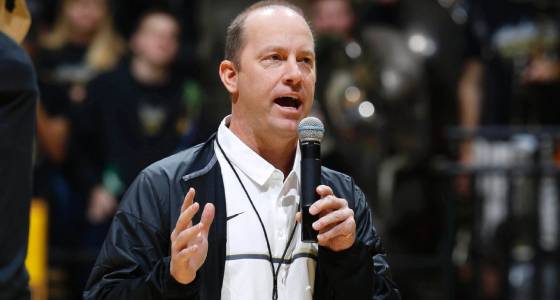 Like any first-year head coach, Jeff Brohm needs to build trust and familiarity with his new players at Purdue, and vice versa. Since his hiring in early December, however, Brohm hasn't opted for any team-building exercises or creative group outings to speed the bonding process.

Those types of things might come later. Right now, there's too much work to be done.

"At this point, it’s been all about getting our guys in the weight room, getting on the field for mat drills and getting in the meeting room," Brohm said last week. "We're kind of doing it the old-fashioned, step-by-step traditional way."

Brohm's offenses might be flashy -- his Western Kentucky teams were among the highest-scoring teams in FBS -- but the business of getting the Boilermakers ready requires a lot of manual assembly. Purdue opens spring practice on Monday afternoon having won just six games total in the past three seasons and with question marks all over the roster.

"We’ve got some areas we definitely have to shore up," Brohm said. "We don’t have a lot of experience in certain places."

Start with an offensive line that struggled to generate much of anything in the running game a year ago that now must replace three starters. Or the receiving group that graduated almost every major contributor but will be a key to implementing Brohm's pass-friendly system. The defensive line and secondary are major concerns as well.

The depth chart problems are a big reason why the Boilers signed five junior-college transfers earlier this month, three of whom (offensive lineman Ethan Smart, defensive end Kai Higgins and defensive back Jalen Jackson) will participate in spring ball. Graduate transfer linebacker T.J. McCollum also followed Brohm from Western Kentucky to West Lafayette, though he will sit out contact drills this spring. Brohm said Purdue is working to bring in some more graduate transfers this spring because "we definitely need some immediate help at certain positions."

Brohm and his staff expect to learn more about what their players can do over the course of these 15 spring practices. He's simplified and trimmed down the terminology of his system and said he feels confident that the players will grasp it quickly. The biggest key this spring, he said, is to instill a competitive environment and fighting spirit.

That's harder than it sounds, given the lack of on-field success the team has experienced. The Boilermakers ended 2016 on a seven-game losing streak and have won only two Big Ten games since the end of the 2012 season.

"Without question, we have to build the psyche of the team," Brohm said. "I do think we can do that. We have some young men who are good kids of high character, and they're hungry. They're wanting to be coached up. They’re starving to have some success.

"So we’ve got to do our part to get that done. Yes, it's going to be a challenge, but I do think if we can build a competitive team that really wants to win, we can make strides."

Building blocks include quarterback David Blough, who led the Big Ten in passing yards per game despite throwing 21 interceptions, a solid group of running backs and tight ends and an experienced linebacker corps.

Purdue also has showed an increased commitment to winning by hiring Brohm, increasing the money available for his staff and undergoing a badly needed $60-plus million facility upgrade that should be completed this summer.

"That's going to be huge," Brohm said. "You just have to have it. Recruits want to see it.

"The people in West Lafayette are hungry for success and want to see some excitement back into the program. I've been pleased with the commitment and the hunger of all the people associated with Purdue and around town. That's what you want. You want the pressure to be on you to win."

Winning right away will be difficult for Brohm and the Boilers, as they open the season against Louisville in Indianapolis, play at Missouri in Week 3, then host Michigan on Sept. 23. Welcome to the Big Ten, Coach.

"We’ve got to be able to start from the get-go with a sense of urgency," Brohm said.

The team-building exercises and other fun stuff can wait. For now, Brohm and everyone in the program has to roll up their sleeves and get to work.