Javier Baez has a unique way of remembering Cubs' championship

CaptionCloseJavier Baez won't ever forget the Chicago Cubs' 2016 world title.If he needs any reminders, all the Cubs' utility infielder will need to do will be to look at his left shoulder.Over the off-season, Baez commemorated the Cubs' long-awaited... 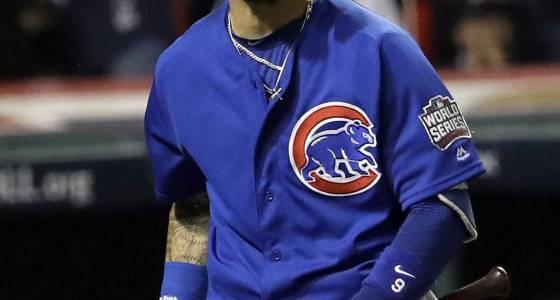 If he needs any reminders, all the Cubs' utility infielder will need to do will be to look at his left shoulder.

Over the off-season, Baez commemorated the Cubs' long-awaited championship with his new tattoo. It will cover most of the utility infielder's left shoulder.

The tattoo features the championship trophy, the year, Major League Baseball's logo, and "World Series Champions" plus part of the Cubs' logo.

Baez told MLB.com that he's got other plans for his arm as far as upcoming tattoo will eventually be exhibited.

"When my whole arm is finished, it's going to make more sense," he said. "It looks really nice but it's there, alone. I've got another thing [planned] for my arm."

The tattoos to come will feature his family, Baez said.

Baez made history with a Game 7 home run for the Cubs, taking a little of the sting out of his struggling postseason, where he hit .167 with 13 strikeouts in 30 at bats.

But all of those difficulties won't be remembered by Baez or the rest of the Cubs fans as much as the final result.

Which is why the gaudy tattoo will recall the biggest moment in Cubs history, both for Baez and their growing legion of fans.