TAMPA — The last time Jacoby Ellsbury started a game lower than third in the batting order, it was 2012 and he hit sixth in the lineup for one game for the Red Sox.This season could be different for the $153 million man. “Everything’s a possibility,”... 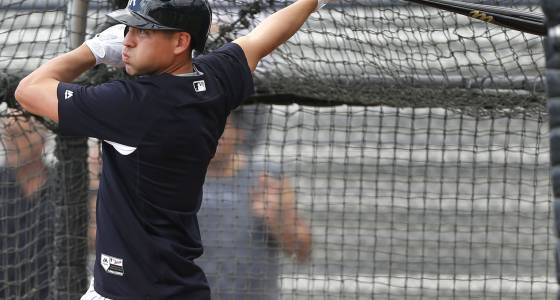 TAMPA — The last time Jacoby Ellsbury started a game lower than third in the batting order, it was 2012 and he hit sixth in the lineup for one game for the Red Sox.

This season could be different for the $153 million man.
“Everything’s a possibility,” Ellsbury said after working out at George M. Steinbrenner Field on Saturday. “Nothing’s set in stone on anything.”

Since signing with the Yankees before the 2014 season, Ellsbury has hit in the top three in every game he has started.

But with Ellsbury and Brett Gardner seeing their production slip, the Yankees are considering bumping one of the lefty hitters down in the lineup — and Ellsbury appears to be the more likely candidate.

Manager Joe Girardi said Ellsbury would make his spring debut Sunday at Steinbrenner Field, adding he wasn’t sure where Ellsbury would hit against the Blue Jays.

Though clearly not comfortable with the subject, Ellsbury didn’t rule out the possibility of moving down.

Well, yeah. But moving into the middle of the order wouldn’t exactly be a demotion.

What about eight or nine?

Ellsbury, who joined the team Tuesday after his wife gave birth, said he still hasn’t talked to Girardi about plans for where he will wind up — and it is something that the Yankees could figure out over the course of spring training.

In the meantime, Ellsbury said he wasn’t interested in playing the “what-if game.”

“It’s not for me to decide,” Ellsbury said. “My job is to go out there and play.”

If the results on the field were better, though, Ellsbury’s place in the lineup almost certainly wouldn’t be a topic of conversation — something that undoubtedly would be a relief to Ellsbury, who repeatedly deflected questions about the topic.
But Ellsbury said he was willing to do whatever the Yankees asked of him.

“I’m a team player,’’ Ellsbury said. “I hit ninth in Boston sometimes. Eighth. At certain times we shuffled the lineup quite a bit. Sometimes [Dustin Pedroia] hit leadoff, and I’d hit wherever in the lineup. I hit 3 here my first year.”

That all is true, but almost all of that maneuvering came early on in Ellsbury’s career.

In his best season — 2011 — Ellsbury led off for Boston 144 times. He hit eighth twice and ninth seven times. But he hit leadoff in every game but one after April 22.

Now 33, Ellsbury is coming off a season in which he stole 20 bases, the fewest amount for a full season in his career.

Sunday figures to be the first look at how the adjustments he has worked on with hitting coach Alan Cockrell have impacted his swing.

If there is no marked improvement in results over the next month or so, Ellsbury may be forced to return to the bottom part of the lineup as the Yankees look to get some of their younger players more at-bats.

“I just can’t wait to get back on the field,” Ellsbury said.