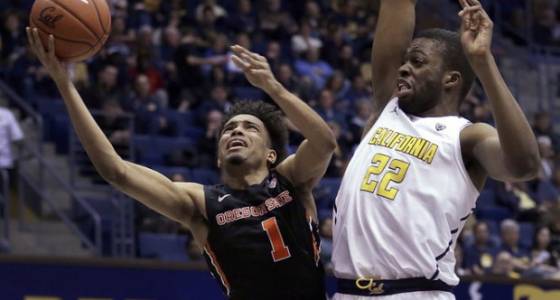 BERKELEY, Calif. (AP) -- Ivan Rabb scored 16 points with nine rebounds in what might have been his final home game, and California beat Oregon State 76-46 on Friday night.

Charlie Moore added 11 points, five assists and six rebounds while Sam Singer scored 14 on 7-of-7 shooting as the Golden Bears (19-9, 10-6 Pac-12) snapped a three-game losing streak and strengthened their hold on fourth place.

The Bears got off to a slow start but used a 20-3 run to pull away in the first half then rode a 16-5 run early in the second half to go up 55-35 on a night when California honored its five seniors in their final regular-season home game at Haas Pavilion.

It very well might have been Rabb's last game there, too.

The 6-foot-11-inch, 220-pound sophomore is being looked at as a potential first-round pick in next year's NBA draft. Rabb has not publicly announced a decision but recently hinted that it was a good possibility that he would leave college and turn pro.

BERKELEY, Calif. -- The Oregon State men's basketball fell to California, 76-46, on Friday night in front of a Haas Pavilion crowd of 9,500.

Ivan Rabb led California with 16 points and nine rebounds, and Sam Singer finished the night with 11 points in his final game at Haas Pavilion.

The Beavers close out their regular season against Oregon in the 348th Civil War at 3 p.m. on Saturday, March 4 at Gill Coliseum. The game will be televised nationally on ESPN2.