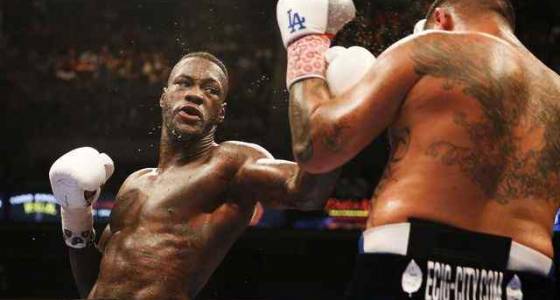 Wilder (37-0, 36 KOs) in late July had surgeries to repair a broken right hand and torn right biceps. When he squares off with Gerald Washington on Saturday for his fifth defense, it will have been more than seven months since he stopped Arreola after eight rounds. It is Wilder’s longest layoff as a prize fighter, and that does not sit well with the 6-foot-7 knockout machine.

“It really hurt me to my hear that I couldn’t fight,” said Wilder, who will take on the 6-foot-6 Washington at Legacy Arena in Birmingham, Ala. (on Fox). “Anybody who knows me knows that I don’t just love this sport, I am in love with it. I am really in love with this sport. I am obsessed with boxing.

“I eat, breathe and sleep it. You know I do it all, this is my life. This is not a hobby for me. This is a lifestyle for me and I address it accordingly. I take it very, very seriously.”

As much as Wilder loves the sweet science, he intimated he doesn’t really want to be in it for a real long run, which is his way of saying he doesn’t want to still be fighting at 40.

He does have four children he adores, after all.

“I want to accomplish my goals and my dreams and I am out of here,” said Wilder, 31, of Tuscaloosa, Ala. “I am doing it for them, and I am going to stick by that.”

Wilder, of course, wants to unify the division. We’re all hopeful that comes to fruition. Assuming he beats Washington, the next step in that direction would be taking on the winner of the April 29 title fight between champion Anthony Joshua and former longtime champion Wladimir Klitschko.

It’s more than that, though.

“As far as my legacy is concerned, I am planning on big, big things for me for now and in the future,” Wilder said. “When I structured my career, I looked at Muhammad Ali, which is my all-time favorite and an idol of mine, and what he has done for this sport. He was a real life hero.

“He was the true definition of a true champion. Wasn’t afraid of nobody and wasn’t scared to go to where you were. Even if it was your backyard, and that is the thing that I want to do.”

Wilder wants to span the globe in this quest, and take on opponents in their homeland.

Wilder has just the type of gregarious personality befitting a heavyweight champion. On the whole, he’s a sweet kid. Until it’s time to rumble. He said that’s when he turns from Deontay Wilder to “The Bronze Bomber.”

“If Bronze Bomber got loose in the streets, it won’t be something nice,” he said. “When I am in the ring, all I think about is knocking my opponent’s head off, getting him out of there. Hurting him. Putting pain to him. I will have no mercy. I will have no pity.”

Oh, yeah, he loves this sport. He’s aching for it. Saturday, he will be Washington’s problem.

“I can’t focus too much on what Deontay Wilder is bringing to the table,” said the 34-year-old Washington, a former backup defensive end at USC. “I have just got to make sure that my game is tight and my game is strong and able to challenge Deontay Wilder.”

Lomachenko, Usyk and Gvozdyk were all part of the 2012 Ukranian national team that competed in the London Games. Lomachenko won gold at lightweight, Usyk took gold at heavyweight and Gvozdyk won the bronze medal at light heavyweight.

“I’m very happy to fight on the same card with Vasyl Lomachenko and Oleksandr Gvozdyk,” Usyk said. “This is something we’ve been talking about since we were amateurs - to have three members of the 2012 Ukrainian Olympic Team in the same event.”

Hunter boxed for Team USA in the London Games, but lost his opening bout to Artur Beterbiyev of Russia. Beterbiyev lost to Usyk in the quarterfinals.