It’s sad what passes for Leicester magic these days

Leicester City’s season took another surreal turn Monday when the relegation-threatened defending champions seemingly got their season back on track by trouncing Liverpool, 3-1. The game was a whirlwind of goals and nostalgia as the Foxes rediscovered... 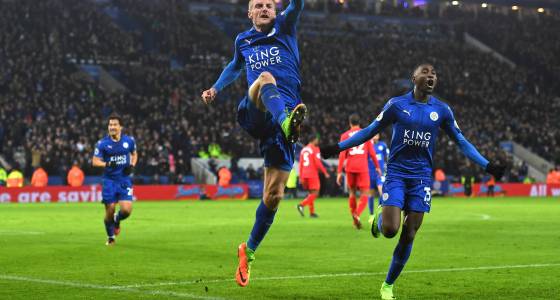 Leicester City’s season took another surreal turn Monday when the relegation-threatened defending champions seemingly got their season back on track by trouncing Liverpool, 3-1. The game was a whirlwind of goals and nostalgia as the Foxes rediscovered their title-winning form just days after they fired Claudio Ranieri, the manager who brought them to the promised land.

Before the Italian was canned and they earned Monday’s bounce-back win, Leicester were in free fall. They never seemed to recover after selling N’Golo Kante to Chelsea over the summer, and hadn’t won a game or even scored a goal in the Premier League in 2017. They crashed out of the FA Cup to a League One side, were played off the field by Sevilla in the Champions League and there were rumors that players had gone behind Ranieri’s back to complain to ownership. Days after the alleged mutiny, the owners pledged their “unwavering support” to Ranieri, though the club was tumbling down the table.

All of that drama happened in February, a marked contrast to the same point last season when Leicester were sitting in first place, 10 points ahead of second-place Arsenal.

In that context, Ranieri’s firing makes sense. Then again, he is the greatest manager in the club’s history, and his charming Italian alchemy transformed journeymen like Jamie Vardy, unknowns like Riyad Mahrez and unrated Englishmen like Danny Drinkwater into a single-minded unit of counter-attacking destruction. Many Leicester fans and commentators believed the manager was “unfireable” and deserved more time to turn things around. They paid tribute to Ranieiri by holding up their blinking cellphones Monday while singing out his name.

Within this cauldron of mixed emotions, it is hard to make sense of the win over Liverpool — a huge result that lifts Leicester out of the bottom three. Liverpool are battling for the top four and are clearly a better team than Leicester.

The Reds only fielded two natural defenders and left themselves wide open to the counter-attack, and Leicester came out of the gate like a swarm of bees. The half-asleep Reds were made to pay in the 28th minute when an innocuous throw-in fell to Marc Albrighton, who played a perfect ball to a streaking Vardy. The embattled English striker slotted past Simon Mignolet, and the rout was on. Drinkwater, who has looked like a shell of himself all season, scored Leicester’s second in stunning fashion to close out the first half, and the Foxes settled things in the 60th minute when a vintage counter-attack ended with a neat Vardy header. With the lead firmly in hand, Leicester settled into the deep defensive shell that served them so well in their title-winning campaign.

The Foxes played out of their skins, yet produced a similar “season-saving” 4-2 win over Manchester City in December that, in retrospect, was just an outlier during their slide.

This game probably will be remembered as the moment when Leicester pulled their season back from the brink of relegation. But who knows? Leicester did, after all, just fire a manager who won a 5,000-to-1 long-shot championship just nine months ago. — M.B.

Wondering why this week’s slate of Premier League games was so lackluster? You can blame the League Cup Final, which matched up two teams, Manchester United and Southampton, who would have featured in the week’s best matchups – against Manchester City and Arsenal, respectively (the contests were postponed). Maybe it was a fair trade considering the game we ended up with.

In a thrilling, down-to-the-wire affair, United topped the Saints 3-2, thanks to two goals from Zlatan Ibrahimovic, including the game-winner. But even the most ardent Red Devils supporter can’t call the result fair. Southampton dominated their more glamorous opponents from the get-go and had the game’s stellar performer in brand-new striker Manolo Gabbiadini, who also scored twice. But the Italian was robbed in of a hat trick when what should have been the game’s opener was incorrectly ruled offside in the 11th minute, a blown call that would come to cost his team dearly.

While Southampton were the better team and Gabbiadini sparkled for 83 minutes, the most important player on the pitch was wearing United’s colors. The 36-year-old Ibrahimovic, who’s established that he has a lot left in the tank, did what he does best and found a way to drag his faltering team over the finish line. He struck a splendid (but probably savable) free kick past Fraser Forster in the 20th, minutes after Gabbiadini’s goal was disallowed. Jesse Lingard would add to United’s lead before the end of the half, but Southampton had evened the deficit by the 48th.

But then in the 87th, Zlatan single-handedly brought back the days when United fans could rely on their team for late-game magic. Moments after heading a ball off the line on defense, the gigantic Swede found himself unmarked in the Southampton box with a softly lofted cross heading his way. With all the time and the space in the world, he gracefully rose up and hammered home a header for the winner. Ibrahimovic’s running celebration, possibly the fastest he’s moved all season, said it all — he’d decided the game was done and the cup was United’s. — B.H.

Like basically all of his teammates, Leicester’s Danny Drinkwater has had a season to forget. But in the 39th minute of Monday’s matchup with Liverpool, the midfielder was suddenly transported back to last season. With a ball bouncing his way just outside the box, Drinkwater ran up to it, swung his leg, struck it pure and scored a swerving rocket that would prove to be the game-winner.

Sometimes it really is all about being in the right place at the right time, as West Ham’s Andre Ayew proved against Watford. The forward was presented with one of the easiest finishes of the season Saturday when he found himself alone in the middle of the six-yard box, the ball slowly rolling to him after caroming off both posts following a shot from teammate Michail Antonio. Ayew just casually swept the ball into the back of the net.

In a week when four teams had off because of the League Cup final, Everton and West Brom cemented themselves in the top half while Bournemouth joined the fight to avoid the drop.