Is Ryan Pace willing to trade down for QB or bluffing? Are his lips moving?

Showing candor rare this time of year for an NFL executive, Bears general manager Ryan Pace admitted Wednesday's media session at the scouting combine in Indianapolis represented one of his two toughest news conferences on the calendar.The other fib-fest... 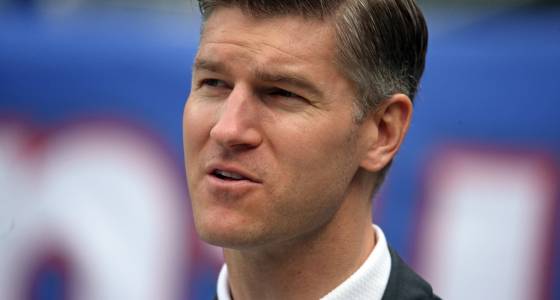 Showing candor rare this time of year for an NFL executive, Bears general manager Ryan Pace admitted Wednesday's media session at the scouting combine in Indianapolis represented one of his two toughest news conferences on the calendar.

The other fib-fest occurs in the days before the NFL draft.

"So it's hard for me to be detailed,'' Pace told reporters with a smile.

In other words, as the song says, if his lips are moving, then he's lying — or at least concealing the truth to put the Bears in the best possible position to draft or sign difference-makers. It's an understandable and accepted offseason NFL tradition. Teams do it routinely, a reminder coming hours before Pace spoke when ESPN.com reported the Patriots have no plans to trade backup quarterback Jimmy Garoppolo. Really? It's March 1.

Translation: The Patriots have yet to hear an offer from the Browns, 49ers or Bears, et al. good enough to part with the polished 25-year-old passer, but 57 shopping days remain until the NFL draft. Everybody has a price.

For his part, Pace sounded amenable to trading down from the No. 3 spot and accumulating picks to position the Bears more strategically to select a quarterback who has "elevated the program'' the way, in his words, Saints future Hall of Famer Drew Brees did at Purdue.

"That means something,'' Pace said.

The quarterback that immediately came to mind when Pace identified that strength was Clemson's Deshaun Watson, the three-year starter whose career ascent mirrored that of the team he carried to the 2016 national championship. Watson, Mr. Intangibles, meets Pace's criteria more than Notre Dame's DeShone Kizer or North Carolina's Mitch Trubisky, the other two quarterback prospects receiving heavy consideration from teams drafting in the top half of the first round. Or it all could be a ruse to make teams believe Pace prefers Watson when he might really covet Texas Tech's Patrick Mahomes, an intriguing talent with a pro sports pedigree projected to go late in the first round or early in the second.

At this point, the safest path for the Bears probably involves drafting Alabama defensive tackle Jonathan Allen third overall and selecting a quarterback to develop with their second choice — whether it comes in the second round or Pace pulls off a deal to receive an additional first-rounder.

Whether calculated or candid, Pace wisely warned of the dangers of "reaching at any position,'' which drafting any of the aforementioned quarterbacks would be at No. 3 based on the opinion of many evaluators in the know. Mike Mayock of the NFL Network, for example, didn't assign a top-10 grade to any quarterback in the draft.

A look at the Bears' quarterbacks through the years, from 1934 to present-day.

"You have to get value — I think when you talk about reaching at any position it's hard,'' Pace said. "I've referenced teams that I've been a part of before where I feel like we've done that. And I've learned from that experience. … You start convincing yourself that you need to start pushing a certain position up the board. And that's when the mistake is made.''

Free agency produces its own kind of peril for GMs with as much salary-cap space as Pace has — perhaps as much as $60 million worth. As active as many expect the Bears to be beginning March 9, Pace spoke from experience — Lamar Houston and Eddie Royal come to mind — when lamenting how long a bad free-agent signing can linger for a GM.

"You can always recover from the player you didn't sign, but you can't from the player you sign at the wrong price,'' Pace said. "Free agency is dangerous. You're stepping through land mines and having to make sure you don't step on the wrong one. A lot of these guys are available for a reason.''

Speaking of Alshon Jeffery, the door to Halas Hall remains slightly ajar for the enigmatic wide receiver, whom the Bears wisely avoided applying the franchise tag to for the second straight year. A player with Jeffery's availability issues just isn't worth the $17.5 million salary the tag would have guaranteed him in 2017.

"There are certain instances when testing the market is a necessary part of the process,'' Pace said.

So is keeping ex-Bear-to-be Jay Cutler under contract until Pace officially finds his successor. Nobody can say publicly what everybody understands privately: The Bears are moving on from Cutler, and a change of scenery can benefit both parties. If the Patriots indeed keep Garoppolo, expect the Bears to sign a veteran free agent to serve as the bridge between 2017 Week 1 and whenever the quarterback Pace drafts in April assumes the helm. The Bears likely will add a veteran wide receiver via free agency, if Jeffery finds a higher bidder as expected, and supplement an aggressive defense coach John Fox hopes will carry his team along with a strong running game.

No matter who plays quarterback for the Bears next year in a win-or-else season for Fox, that approach to Sundays won't change.

And that's the truth.