Is Michael Conforto forcing the Mets to move Jay Bruce to first base? 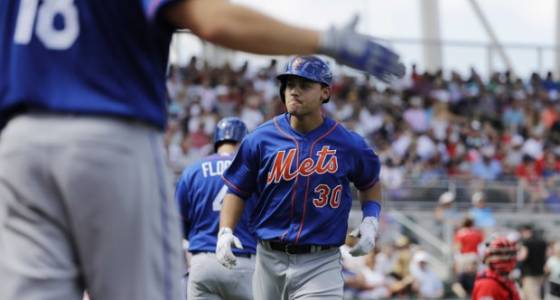 Bruce might not have much time to get comfortable. Conforto may quickly be pushing him to first base, where he's been working out in place of the injured Lucas Duda.

Conforto was so bad last year that he was demoted to Triple-A. But he came to spring training determined not to let that happen again in 2017. So far, he's done a good job of showing that he belongs on the big league roster: In three games as a right fielder and pinch-hitter, Conforto is 5-for-7 with three runs scored, three RBIs and two home runs.

"He's looking at last year saying, 'I had a down year, it's not going to happen again,'" manager Terry Collins said. "He is looking very, very good. His swing is as good as I've seen it. And I've seen a lot of them."

His swing is flatter, more compact and more powerful. And the power is coming from his legs. It was important for Conforto to work with his natural swing, so he didn't remake it, he only enhanced it, by connecting his lower half with his upper half.

"He's not swinging uphill like he did last year," Collins said. "He got so hot in the first month and he was hitting those home runs and I think he just got caught up in trying to lift the ball and get it up in the air instead of driving it, because he's got plenty of power. Right now, we're back. We're seeing that same inside-the-ball swing that he got to the big leagues with in the beginning."

Conforto homered off of Detroit left-hander Daniel Stumpf in the sixth inning of Sunday's win against the Detroit Tigers. The home run off of a lefty was as much of a positive indicator as the three-game hit streak, given Conforto's .104 average against left-handed pitching last season.

As for Bruce, while he didn't seem to be jumping at the chance to play first base, but it seems like that's where Collins might want to see him more often. Neil Walker will begin working out at the position this week, but Collins said he didn't want to play too many guys out of position and seemed impressed with Bruce.

"He will be doing it regularly right now," Collins said. "I liked everything that I saw today. It looks like he's got the athleticism, he's got the hands, he's got the arm angle. He made some throws in our drills that you wouldn't expect and outfielder to be able to make, but yet he does. So if that's where we have to go, I think he'll be fine."

If it wasn't before, right field is now a full-blown position battle.