In the modern pentathlon, you never know what you're going to get

To a kid growing up in New Mexico, it seemed like something out of a dream or maybe an action movie.Nathan Schrimsher had shown potential while competing for a local swim club, prompting a coach to pull him aside and suggest he try modern pentathlon.“Riding... 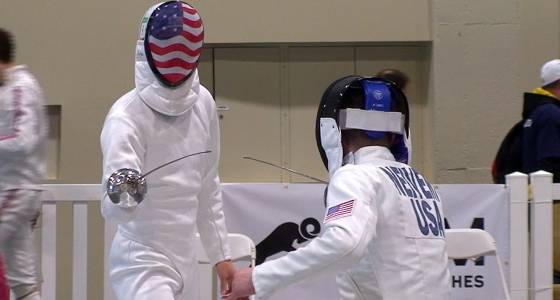 To a kid growing up in New Mexico, it seemed like something out of a dream or maybe an action movie.

Nathan Schrimsher had shown potential while competing for a local swim club, prompting a coach to pull him aside and suggest he try modern pentathlon.

“Riding horses? Shooting guns? Sword-fighting?” Schrimsher recalls thinking. “Why are all these weird sports put together?”

A decade later, the 24-year-old ranks among the world’s best in a quirky Olympic sport that demands incongruous skills — running, swimming, equestrian, fencing and pistol shooting — all performed in a single, whirlwind day.

To make things even trickier, athletes are assigned unfamiliar horses in the equestrian segment and must scramble through dozens of rapid-fire, one-touch bouts in fencing.

Running and shooting are combined, forcing them to take aim at distant targets while breathing hard and wiping sweat from their eyes.

“It isn’t like the decathlon where you have 10 different kinds of track and field,” said David Wallechinsky, an Olympic historian. “This takes a special kind of athlete.”

Name another event that has seen a runner sprint toward victory, only to stumble over a potted plant. Or a medal favorite try to punch his horse. Or a young lieutenant named George S. Patton Jr. throw a fit as he finishes just off the podium

This week, top men and women pentathletes from around the world have gathered in Southern California to compete in this sport that has a history of unpredictability.

“It’s like a box of chocolates,” Schrimsher said. “You never know what you’re going to get.”

Modern pentathlon does not draw big crowds or take place in fancy arenas. This week, the World Cup circuit has landed at a county fairgrounds in Pomona.

Because the Fairplex does not have a pool, men’s qualifying began Wednesday with the field taking a bus to a nearby health club.

Racquetball players and yoga students turned to look as a herd of elite athletes trudged through. Schrimsher and his colleagues are accustomed to puzzled glances.

“No one really knows what we do,” he said.

Growing up in Roswell, Schrimsher was similarly bewildered when he and his younger brother, Lucas, were enlisted by their swim coach. The boys, who had experience riding and shooting on their family’s cattle ranch, soon threw themselves into the sport.

The original pentathlon, in ancient Greece, featured a very different blend of running, spear-throwing, discus and long jump, culminating in a fierce wrestling match that ended only when one of the combatants surrendered.

As Baron Pierre de Coubertin launched the modern Games in the late 1800s, he suspected these warrior skills favored by Sparta might be too dangerous. Still, the idea of a diverse event was appealing.

“Athletes were too specialized for him,” said Rob Stull, an Olympic pentathlete who now heads the sport’s governing body in the U.S. “He was trying to make better people.”

On several occasions, De Coubertin proposed a new form of pentathlon but was rejected by his fellow Olympic leaders. He needed a story to persuade them.

So he made one up about a cavalry officer ordered to deliver a message during wartime. The soldier sets off on a horse picked from the stable, but is forced to dismount and fight the enemy with pistol and sword. Escaping, he swims across a river, then runs to his destination.

De Coubertin believed it would test “a man’s moral qualities as much as his physical resources and skills, producing thereby a complete athlete.”

The pool at the Claremont Club was a little warm for Schrimsher’s liking, but the starting blocks felt good. Swimming is one of his strengths — it helped him finish 11th at the 2016 Rio de Janeiro Olympics — and he churned to a fast time Wednesday in the 200 meters.

Back at the Fairplex, there were only a few minutes to dress in heavy fencer’s gear at an exposition hall that echoed with clanging steel blades.

Epee is normally a cautious undertaking, with opponents jockeying back and forth, but in pentathlon the bouts are limited to one minute in qualifying and 45 seconds in the final round. If neither opponent scores a touch, both register a loss.

Schrimsher proceeded through a marathon of brief clashes, one after another, constantly pushing forward on the strip while trying not to be reckless. He bounced and flicked his blade, looking for opportunities to lunge.

At the 1976 Montreal Olympics, the reigning silver medalist — Borys Onyshchenko of the former Soviet Union — was caught using an epee that allowed him to record touches by pressing a concealed button.

There have been other curious moments in the sport’s history.

A 26-year-old Patton prepared for the 1912 Games on a diet of raw steak and salad, according to Wallechinsky’s “The Complete Book of the Olympics.”

The future general complained bitterly during the shooting event, claiming he was charged with a miss when one of his bullets passed cleanly through a hole that was already in the target. Before the cross-country run, Wallechinsky wrote, Patton received an injection of opium — a legal performance-enhancer at the time — but ultimately finished fifth.

At the 1932 Los Angeles Games, eventual champion Johan Oxenstierna of Sweden was nearly arrested while taking practice shots in the woods near the gun range.

The 1968 Mexico City Olympics saw Hans-Jurgen Todt of West Germany lose any chance at a medal when the horse he drew repeatedly balked at an obstacle on the show-jumping course. An infuriated Todt  attacked the animal and had to be restrained by teammates.

Though the riding competition involves some luck, Stull said the best pentathletes can use their experience — and a 20-minute warmup — to adapt to any animal.

“With German horses, the big warmbloods, you have to sit deep in the saddle or they won’t jump,” he said. “If you do that on an Italian horse, they’ll just take off.”

Even the running segment is vulnerable to idiosyncrasies.

At the 1984 Los Angeles Olympics, athletes had to race across spongy ground. Svante Rasmuson of Sweden took the lead with 100 meters remaining but stumbled and kicked one of the potted plants that marked the course’s boundary.

After finishing second to an Italian runner, Rasmuson grumbled: “I hate soft dirt.”

The fencing did not go so well for Schrimsher, who won only about half of his bouts. Peeling away his sweaty uniform as he stepped into a changing area, he grumbled: “I’m glad that’s over.”

With 63 men in Wednesday’s preliminary round — and 53 in the women’s event — it was impossible to supply enough horses, so the riding portion was reserved only for the finals. Competitors moved directly to the last preliminary event, the laser-run.

“If I can shoot well, then I’ll just hold on for the run,” Schrimsher said. “Running is my weak link.”

In an era when the Olympics have tried to stay relevant by adding snowboarding and BMX racing, modern pentathlon has lived in fear of being dropped from the program.

Baseball, softball and wrestling officials complained when their sports were cut — the latter was subsequently reinstated — and De Coubertin’s favorite was not. Pentathlon has tried to make itself more viewer-friendly with each successive Olympics.

In 1996, the competition was compressed from five days to one. A women’s division was added four years later. In 2012, shooting switched to laser pistols and combined with the run.

Still, the grandstand at the Fairplex horse racing track was mostly empty for Wednesday’s laser-run.

Competitors lined up at a long table, aiming their pistols 10 meters down-range at a target the size of an orange. As one of the best marksmen on the World Cup circuit, Schrimsher quickly plinked the required five hits and took off running, following a sandy path that wound 800 meters through the race track’s infield.

With a chill wind blowing and dark clouds bunched against the nearby San Gabriel Mountains, the runners could stay cool but soon battled fatigue as they repeated the shoot-and-run loop four times. Weary arms made aiming difficult. Several athletes — struggling to hit the target five times — threw their hands up in frustration.

“We’ve all been put through the wringer on this,” Schrimsher said.

Training for such diverse challenges can be costly, so pentathletes have traditionally come from the military. Schrimsher is a sergeant in the U.S. Army’s elite athlete program, which allows him to hone his skills while serving active duty.

Calmly squeezing off shots — and trying not to lose too much time in the running — he crossed the finish line with a spot in the finals, which were scheduled to conclude Friday evening.

With the women’s finals and mixed team relays continuing through the weekend, Schrimsher wasn’t exactly banking on huge crowds, but — given modern pentathlon’s unusual nature and even stranger history — he wished more people would give it a chance.

“It is a weird sport when you talk about it,” he said. “When you see it, it’s really cool.”

After a first half in which he played like that impostor in a Tom Brady mask, the New England Patriots quarterback put on a Super Bowl performance for the ages Sunday, leading his team back from a 25-point deficit to beat the Atlanta Falcons in overtime, 34-28.

After a first half in which he played like that impostor in a Tom Brady mask, the New England Patriots quarterback put on a Super Bowl performance for the ages Sunday, leading his team back from a 25-point deficit to beat the Atlanta Falcons in overtime, 34-28.

Chargers owners Dean and John Spanos talk about the team as it prepares to relocate to L.A.

Chargers owners Dean and John Spanos talk about the team as it prepares to relocate to L.A.

New Rams Coach Sean McVay talks about his vision for the team.

New Rams Coach Sean McVay talks about his vision for the team.

Lindsey Thiry and Nathan Fenno discuss the Chargers' announcement they are moving to Los Angeles.

Lindsey Thiry and Nathan Fenno discuss the Chargers' announcement they are moving to Los Angeles.