TAMPA -— He joined thousands of other runners on the southern edge of downtown Tampa before dawn Saturday, and began running smack into a cloud-stained sunrise.2 Days Ago3 Days Ago1 Week AgoRoughly 47 minutes later, Austin "A.J." Richmond triumphantly... 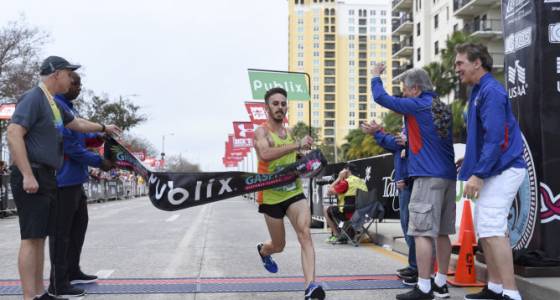 TAMPA -— He joined thousands of other runners on the southern edge of downtown Tampa before dawn Saturday, and began running smack into a cloud-stained sunrise.

In what he called his final competitive race, the 31-year-old married father of three pulled away from Babson Park neighbor Jon Mott in the final one-third of the Publix Gasparilla Distance Classic 15K to win the event for the second time, in 47 minutes, 26 seconds.

"This is it for me, I'm done," said Richmond, who nonetheless may run this morning's half-marathon. "I decided to move on to other things for a little while to see how I feel."

An English teacher and cross country/track coach at Lake Wales High, Richmond finished 55 seconds ahead of Mott, his former Webber International University teammate. The two had pulled away early in the race — staged in muggy 70-degree temperatures — and were 200 meters ahead of the nearest challenger halfway through.

"We were supposed to go much faster early on," said Mott, a 2006 Northeast High graduate and top Florida finisher at the 2016 Olympic marathon trials. "But we ran conservative and I cramped up bad (at seven miles). And then he just held on pretty much and I fell off."

Richmond collected $2,000 for the win. He said he and Mott, who regularly train on red-clay roads meandering through acres of eastern Polk County orange groves, were "peaking" for this race.

They have combined to win the Gasparilla 15K in five of the last seven years. Richmond won last year's half-marathon.

"We both ran a really smart race, we worked with each other and not against each other," Richmond said.

"With just a couple of miles to go, it was kind of an every-man-for-himself kind of thing. But he was going as hard as he could, I went as hard as I can. If it was any other day he probably beats me. You flip a coin and that's who's gonna win between us."