If there is evidence Alberto Salazar broke rules, where is it? Oregon track & field rundown

Here we go again. The Sunday Times of London has come out with a story connecting Nike Oregon Project coach Alberto Salazar, drugs and four-time Olympic gold medalist Mo Farah in the same headline. It's the kind of headline that ensures wide readership.... 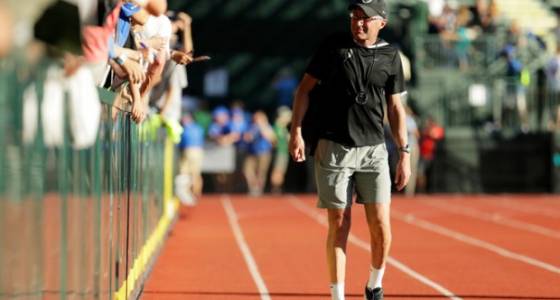 The Sunday Times of London has come out with a story connecting Nike Oregon Project coach Alberto Salazar, drugs and four-time Olympic gold medalist Mo Farah in the same headline.

It's the kind of headline that ensures wide readership.

Once you get past the headline and into the body of the story, you learn ... what?

The story, based on a draft of a U.S. Anti-Doping Agency report that is nearly a year old and leaked by alleged Russian hackers, does not include a single proven rules violation.

If the USADA had actionable evidence, why would it have sat on it for a year?

Does this mean the conclusion of the unnamed writer of the report that Salazar "almost certainly" broke doping rules since has been disproven?

According to the Sunday Times, the report's writer apparently alleges there is "substantial and compelling" evidence Salazar and Houston endocrinologist Jeffrey Brown colluded to use prescription medications "in sometimes potentially unlawful" ways to boost performance.

If there is "substantial and compelling" evidence that Salazar and any doctor or doctors conspired to break doping rules or damage athletes' health, it's time to present it.

In an email response this morning, Salazar wrote:

"I have voluntarily cooperated with USADA for years and met with them over a year ago.  The leaking of information and the litigation of false allegations in the press, is disturbing, desperate and a denial of due process. I look forward to this unfair and protracted process reaching the conclusion I know to be true."

It's clear to me that many in the insular world of elite distance running believe Salazar has broken drug rules.

But in two years of published and unsubstantiated anecdotes and innuendo, I've seen no proof.

Indeed, Salazar presented more documented evidence of his compliance with rules in a lengthy 2015 defense of allegations made against him and the Oregon Project in stories by the investigative website ProPublica and the BBC than was presented in the stories.

In the meantime, Oregon Project athletes continue to test clean.

Here is reaction from other news outlets:

-- The experts at LetsRun.com dig into the Sunday Times story with this analysis.

-- Citius Mag has these takeaways from the Sunday Times story about Salazar and the Oregon Project.

BBC story says it's unclear whether the USADA still holds to the reported conclusions in the leaked report.

Mo Farah tweets his frustration at having his name and reputation tarnished without evidence.

The Bowerman Track Club's Ryan Hill tells FloTrack that a U.S. record in the 5,000 at the Boston University Last Chance Meet is not off the table. (Video)

The BTC's Chris Derrick talks to FloTrack about bouncing back from an injury-crimped year in 2016. (Video)

Paul Merca: Big performances by Cunliffe and Oregon's Marcus Chambers on the final day of the MPSF Indoor championships.

Cunliffe tells RunnerSpace.com she trained through the race. (Video)

Ducks take care of business at the MPSF Indoor Championships, now await the final qualifying lists for the NCAA INdoor.

UO freshman Katie Rainsberger talks with RunnerSpace.com about winning the mile final from in front at the MPSF Indoor Championships. (Video)

The experts at LetsRun.com say Wilson Kipsang cements his legacy as one of the all-time greats by winning the Tokyo Marathon in 2:03:58.

LetsRun.com: Sarah Chepchirchir emerges as one of the world's best marathoners and U.S. runner Sarah Hall runs a terrific race.

Kipsang and Chepchirchir clock world-leaders while winning the Tokyo Marathon.

The front page from LetsRun.com.

The links from Duck Sports Now.

The links from Beaver Sports Now.