If only Vigneault checked if Rangers already have piece they need

The trade deadline is two days away, the Rangers are attempting to bolster the defense, but unless the price unexpectedly drops so dramatically on Kevin Shattenkirk that St. Louis presents general manager Jeff Gorton with an offer he cannot refuse, the Blueshirts... 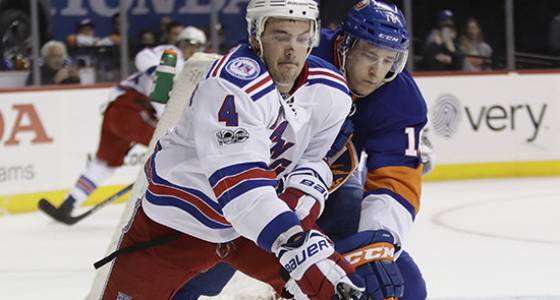 The trade deadline is two days away, the Rangers are attempting to bolster the defense, but unless the price unexpectedly drops so dramatically on Kevin Shattenkirk that St. Louis presents general manager Jeff Gorton with an offer he cannot refuse, the Blueshirts just might be better off putting all of their expendable resources into acquiring a top-nine forward.

This, 62 games into a season far more successful than just about anyone could have imagined in September, is why you wish coach Alain Vigneault would have given more time and a longer look to Adam Clendening, because maybe, just maybe, the coach’s seventh defenseman fits New York’s need for a sixth better than anyone the Blueshirts might acquire before 3 p.m. Wednesday.

Clendening was in for his third straight at the Garden on Sunday with Kevin Klein (back) sidelined again in the 5-2 defeat to the Jackets in the win-for-losing battle for a top-three seed in the Metropolitan Division.

The 24-year-old has played in six of the last nine and 15 of the last 23 filling in for various injured defensemen.

And he has done fine, just fine, paired almost exclusively with 22-year-old rising star Brady Skjei on the club’s third pair. Indeed, the Skjei-Clendening combination has been more reliable recently than the Marc Staal-Nick Holden second tandem that struggled through an abominable performance against the Jackets, though one would have to take into account their respective matchups and zone stars in a full comparison.

Clendening, who has gotten into only 24 games, has been the darling of advanced-stat aficionados since the first week of the season, when, opening in place of Klein (back spasms then as well), he compiled off-the-chart possession numbers driven by Blueshirt dominance in Games 1, 2 and 4 against the Islanders, Blues and Red Wings, respectively.

Though I tend to be somewhat skeptical of Corsi as a reliable measuring stick, that doesn’t necessarily mean its advocates are wrong, at least not all of the time. Though Clendening isn’t always the most dependable guy under heavy forecheck pressure and isn’t always strong enough in his one-on-ones, neither is Klein and neither is Detroit’s available Brendan Smith, an average skater who would be playing on his off-side if he comes to New York.

The puck moves out of the zone when the mobile Clendening gets consistent playing time. He’s able to deliver the puck, as he did to Rick Nash to spring No. 61 for an early first-period breakaway on which he was foiled by Sergei Bobrovsky.

And again, though attempts for/against can be misleading because attempts aren’t even close to being created equal, the fact is that the Skjei-Clendening pair owned a 62.7 score-adjusted Corsi rating in 137 minutes while the Skjei-Klein tandem was at 48.8 in 441 minutes before Sunday, per Datarink.com.

The sample size might be too small to project performance down the stretch and in the playoffs. But the Rangers haven’t missed a beat in their game when Clendening has been in the lineup over the last month, going 7-3 in his 10 appearances since Henrik Lundqvist regained his form.

And if the sample size is too strong, well, that is all on the coach, who insisted on going with Klein (other than one healthy scratch) and a revived Dan Girardi (other than one night off for rest) game after game after game. This would be the time a more regular rotation would have benefited the Blueshirts and their management as they assess the club’s personnel and its needs.

'Everyone' is talking with Rangers about a J.T. Miller trade 0:0 So it’s three well-connected sources within the past three days...

And though depth on defense is required for a deep postseason run, the Rangers may have a greater need for a top-nine winger after having fallen into a offensive torpor, scoring two goals or fewer in five of their last six games.

If the price tag is reasonable to rent, say, Dallas’ Patrick Sharp or Arizona’s Radim Vrbata, the Blueshirts could then shift Michael Grabner to the fourth line with Oscar Lindberg (presuming he wouldn’t be part of the return package) and Jesper Fast.

Even as the Blueshirts have ascended into a more credible contender, they have only so many chips to play. And it might well be a waste to use them on a bottom-pair defenseman when the guy they’re looking for might already be here.