If he's A-Gone, then what will Mexico do in the WBC?

MEXICO CITY -- As if their group wasn’t hard enough already. Last week, even with a full roster at Mexico's disposal, their World Baseball Classic aspirations beyond the first round were up in the air as they prepared to take on Italy, Puerto Rico... 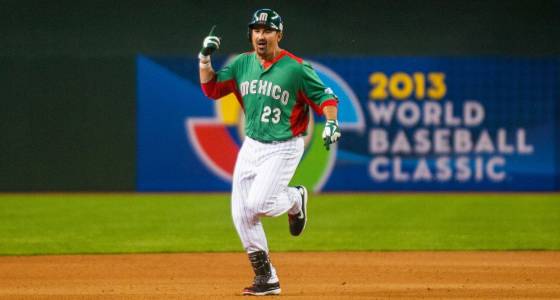 MEXICO CITY -- As if their group wasn’t hard enough already. Last week, even with a full roster at Mexico's disposal, their World Baseball Classic aspirations beyond the first round were up in the air as they prepared to take on Italy, Puerto Rico and Venezuela.

Aside from home-field advantage in the western city of Guadalajara, manager Edgar Gonzalez was banking on perhaps the best potential starting lineup in the country’s history to lead him toward a historic performance in the tournament. In the space of only a few days, however, Mexico lost Oakland Athletics outfielder Khris Davis and, perhaps even more worrisome, Edgar’s brother, Adrian Gonzalez, is in doubt due to the lingering tendinitis in his right elbow.

Though Gonzalez has stated he is pain-free, the decision to allow him to play will ultimately come down to the Dodgers medical staff. If his own assessment is any indication, the first baseman is ready and willing to suit up for his fourth consecutive WBC in 2017. "I'm planning to play," he told MLB.com on Thursday.

"I'm hoping for it. We've taken all the right precautions. I've got to get cleared by the doctors, so we'll see,” he continued.

Mexico will also petition the Dodgers to allow 20-year-old pitcher Julio Urias to join the team from the get-go, rather than deciding to give him innings starting in the competition’s second round as originally planned. Edgar Gonzalez also selected two other players from the Los Angeles squad: reliever Sergio Romo and highly touted outfielder Alex Verdugo.

Davis, who hit 42 HR and produced 102 RBIs in the 2016 season with Oakland, bowed out of the tournament earlier this week. The A’s outfielder, expected to protect Gonzalez in the lineup, is a big loss in the middle of Team Mexico’s lineup. But there’s no doubt that Gonzalez’s potential absence would be even bigger, factoring in his leadership role and his overall experience. Statistically, Gonzalez is the country’s all-time WBC leader in games (17), runs (13) and walks (18), all the while hitting .275 and posting an OPS of 1.001 throughout all four editions.

The only other natural first baseman on the Mexican roster as of now is Japhet Amador, who plays in Japan for the Tohoku Rakuten Golden Eagles. Amador hit 41 HR in the 2015 Mexican League season and won MVP honors following the campaign. The former Houston Astros prospect is listed as weighing more than 300 pounds, and he hit .258 with 9 HR and 19 RBIs with Rakuten last season.

Should Adrian Gonzalez be left off the roster, Amador would likely occupy the first-base spot. The manager also noted he’ll have plenty of offensive contributors around the rest of the diamond. “We’re going to be benefited by having Brandon Laird at third base, Luis Cruz at second base [and hopefully] my brother at first.”

Despite manager Edgar Gonzalez touting Mexico’s pitching staff as a strong one for the 2017 tournament, his is a luxury most Mexican managers have had throughout the competition’s history. For this edition, the former San Diego Padres infielder was licking his chops at having a strong offensive core. “Mexico always has good pitching. We have a good staff [this time around], one of the best in the tournament,” he said in an interview with EFE. “[We also] have good power hitters, and though we’re lacking a bit of speed, we’re complete.”

But offense, on the other hand, has been a constant concern for Mexico in past tournaments, a worry now heightened once more with Davis bowing out and Adrian Gonzalez in limbo. In all five decisive second-round games they’ve played since 2006 in the WBC, Mexico has never scored more than four runs in any of those contests. On four of those occasions, they’ve failed to score more than two runs.

In order to reach the team’s pretournament goal of making the semifinals for the first time ever, that will likely need to improve, especially against offensively stout teams such as Venezuela and Puerto Rico in the opening group stage.

On the cusp of potentially losing three major contributors -- Gonzalez, Davis and Urias -- for the initial group stage, Edgar Gonzalez is still bullish on the team’s chances.

“I think we can compete with anyone. We’re not lagging behind anyone in terms of talent,” he says.