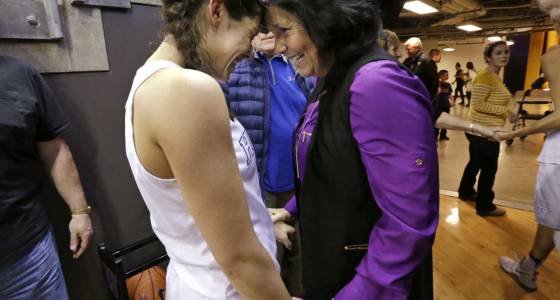 Washington's Kelsey Plum (10) shoots as Utah's Emily Potter defends in the second half of an NCAA college basketball game Saturday, Feb. 25, 2017, in Seattle.

Washington's Kelsey Plum (10) shoots as Utah's Emily Potter defends in the second half of an NCAA college basketball game Saturday, Feb. 25, 2017, in Seattle.

The Washington guard set the NCAA career scoring record in unbelievable fashion, scoring 57 points on Saturday against Utah. She came into the game needing 54 points to match Jackie Stiles' mark, and Plum broke the decades old record midway through the fourth quarter of the win.

"It was pretty special. It was kind of the icing on the cake," Plum said of breaking the mark in her final home game. "Getting the win on senior night with my family here and then that ceremony after kind of put it in perspective that this was an amazing day."

Huskies coach Mike Neighbors was thrilled that his guard could get the mark at home — and now focus strictly on the Pac-12 Tournament and NCAA Tournament.

"Now every basket she makes is more history," Neighbors said.

Plum wasn't the only newsmaker this week. Baylor coach Kim Mulkey became the second fastest coach to win 500 games on Saturday. What will be remembered more were her remarks postgame , which she later backtracked in an interview with ESPN.

Most of the major conferences begin their tournaments over the next seven days.

Other things that happened this week:

HONORING ANN: The practice court for the UCLA women's basketball team will be named for Bruins great Ann Meyers Drysdale when the facility opens next year.

The university's athletic department said Friday that an anonymous donor made a "significant financial contribution" to the Mo Ostin Basketball Center project. As part of the gift, the donor requested that the practice court be named in Meyers Drysdale's honor.

Meyers Drysdale says she was "at a loss for words" when athletic director Dan Guerrero told her.

She helped lead the Bruins to the AIAW national championship in 1978 after becoming the first woman to receive a full athletic scholarship from the university. Meyers Drysdale was elected to the Naismith Memorial Basketball Hall of Fame in 1993.

SHOCKING STAT: Tennessee upset No. 3 Mississippi State on Sunday, marking the first time the Lady Vols have beaten a top-three opponent on the road since a win over No. 1 Duke on Jan. 24, 2004.

TIP INS: Iowa State won at No. 6 Texas on Friday, which was the highest ranked road win in program history. The previous best was beating then-No. 8 Texas in 2014-15. ... Columbia's Camille Zimmerman set the single-season Division I scoring record for Columbia, surpassing Judie Lomax and her 521 points in the 2009-10 season. Zimmerman broke the mark late in the first quarter in Friday's loss to Princeton. She has 572 points, 26 behind Ellen Bossert's program record set in the 1985-86 season when the Lions were a Division III school. ... LSU junior Raigyne Moncrief had six steals on Sunday and now holds the school record for single-season steals with 102. She broke the record previously held by Danielle Ballard who had 100 in 2012-13.