CLEARWATER, Fla. -- Yankees shortstop Gleyber Torres, a 20-year-old farmhand seemingly destined for greatness, stepped his way to a big lead off second base during a fifth-inning rally Saturday. Who knew that one of baseball's very best prospects was... 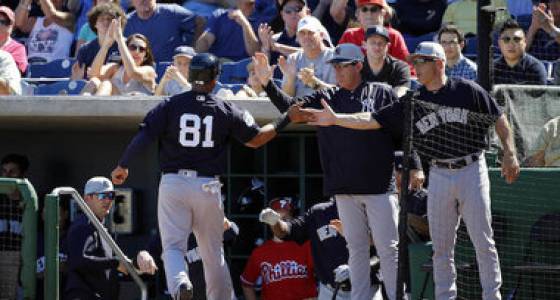 CLEARWATER, Fla. -- Yankees shortstop Gleyber Torres, a 20-year-old farmhand seemingly destined for greatness, stepped his way to a big lead off second base during a fifth-inning rally Saturday.

Who knew that one of baseball's very best prospects was about to illustrate a trait that Yankees great Derek Jeter had?

Jeter's baseball IQ was off the charts and Torres seems to have it.

Back to Torres leading off second ...

Yankees third baseman prospect Miguel Andujar was wading off third, outfield prospect Dustin Fowler was hitting and Mark Appel on the mound for the Phillies.

In came a pitch in the dirt that bounced off catcher Cameron Rupp and a long ways back and to the right ... almost to where the Phillies' first-base dugout starts.

Andujar scored easily, Torres hustled to third ... and then kept on doing and, holy cow, wound up scoring all the way from second on a wild pitch.


"I was ready for anything," Torres said during an interview in the late innings of the Yankees' 6-5 loss. "It was a low pitch. It bounced away and I was ready to run, and I did."

Torres, who started at short and was 2-for-2 with two doubles, made it sound as if his heads-up play was no big deal, but it's something rarely seen in baseball from speedy veterans let alone a kid who probably will start the season in Double-A.

Speed is the one and only baseball tool that is just average for Torres, but baseball smarts can make it for it and they did in this instance.

"It's just good instinct," Yankees manager Joe Girardi said. "It's aggressive base-running. There's a lot of things that he has to do. He has to get a good secondary lead, a good jump on his secondary (lead) and then read the ball. And he did all three.

"Yeah, he's a bright kid that knows how to play the game. And you can look at his at-bats ... double down the right-field line, double down the left-field line. Using the whole field. He played a very good shortstop. So his IQ is really good."

At that point, Girardi was asked if Torres reminds him at all of a young Jeter.

"They're probably different kind of players in a sense," he answered. "As far as being able to play in the moment, yes."

Scoring from second on a wild pitch is a play in the moment, and we're probably going to see a lot of these types of special things from Torres down the road.

Maybe by September with a late-season call-up, maybe not until 2018 or perhaps not until the year after.

Where Torres plays is a question mark, too, because the Yankees already have a fairy young shortstop who is coming off a very good season in Didi Gregorius.

So maybe Torres shifts to second. Maybe Gregorius is traded. However this plays out, Torres is answering the bell as a future star, which was his calling card when the Yankees nabbed him last July from the Chicago Cubs in the Aroldis Chapman trade.

Torres is willing to be patient in his climb up the Yankees' minor-league ladder.

"I think the best thing that I can accomplish in this spring training - in my first (big-league) spring training - is experience," he said. "And being able to mature. Learn from the teammates that I have because this is a very unique opportunity."

And Gleyber Torres, a Venezuelan who speaks pretty good English but sometimes uses a translator, looks to be a unique player ... just maybe, dare we say, another Derek Jeter in the future.